Daughter of a Marine & Co-founder and COO of Veterans Advantage 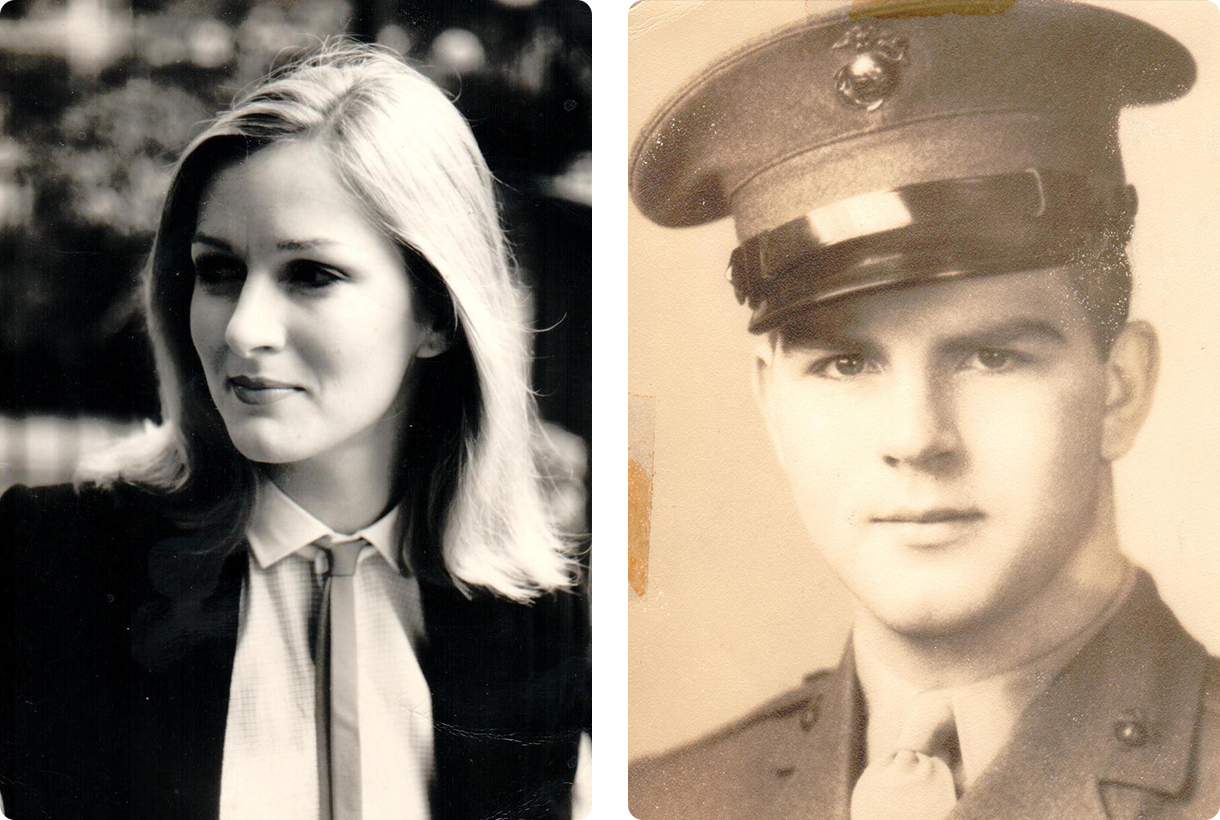 Lin Higgins, the Co-founder and Chief Operating Officer (COO) of Veterans Advantage, is the wife of Scott Higgins, a Vietnam Vet, mother of 3, and the daughter of a WWII Veteran. Lin's father, Charles "Chick" Plank, volunteered for duty and was committed to serving his country as a Marine Corps Officer. He arrived in the South Pacific at end of the Battle of Peleliu, which is considered to be one of the most bitter Marine battles ever fought. He was stationed on the island to command the troops in cleaning up after the battle, and would later recall stories of being shot at by the Japanese who had not surrendered and were hiding in caves while paroling the island in his Jeep.

My dad loved his time in service and was not only proud of being a Marine, but also was dedicated to instilling his Marine Corps training and values into his family of seven children. I feel very much like I was raised in the Marine Corps myself! On summer mornings when we were out of school, my dad would loudly play a military reveille to get us up, and we were to immediately line up by our flag pole to raise the American flag. We made our beds military-style and every bed had to stand his test of a quarter bounce. We endured our daily KP duties--no dishwasher machine in our house! My dad would belt out the Marine Hymn while doing chores, while driving the family station wagon, or just about anywhere he wanted to. As kids, we would love to join in. It was a long time before I realized every American family did not live like this!

Lin's experiences growing up on a ranch in Northern Michigan, with a proud Marine as a father, is the main reason she is so dedicated to including family members in the military community Veterans Advantage serves. Her father contracted Malaria during his tour of duty in the Pacific, and struggled with the aftermath for much of his life. He was handicapped by his illness, but never went to the VA for any health care or collected disability benefits, and could not handle full-time employment as a malaria survivor.

My mother knew my dad when he was in the service, and I know it was tough on their relationship when he was overseas. And, she had to deal with the aftermath of war, particularly his suffering with malaria. On their honeymoon driving across the U.S., my father had a bad malaria attack in the rented room where they were staying. She was all alone and thought he was going to die. He eventually recovered, but I can't imagine how terrifying that experience was for her. Even if, like me, you were not born when your father or family member served, it does not mean you don’t experience any sacrifices as a result of their service to our country. 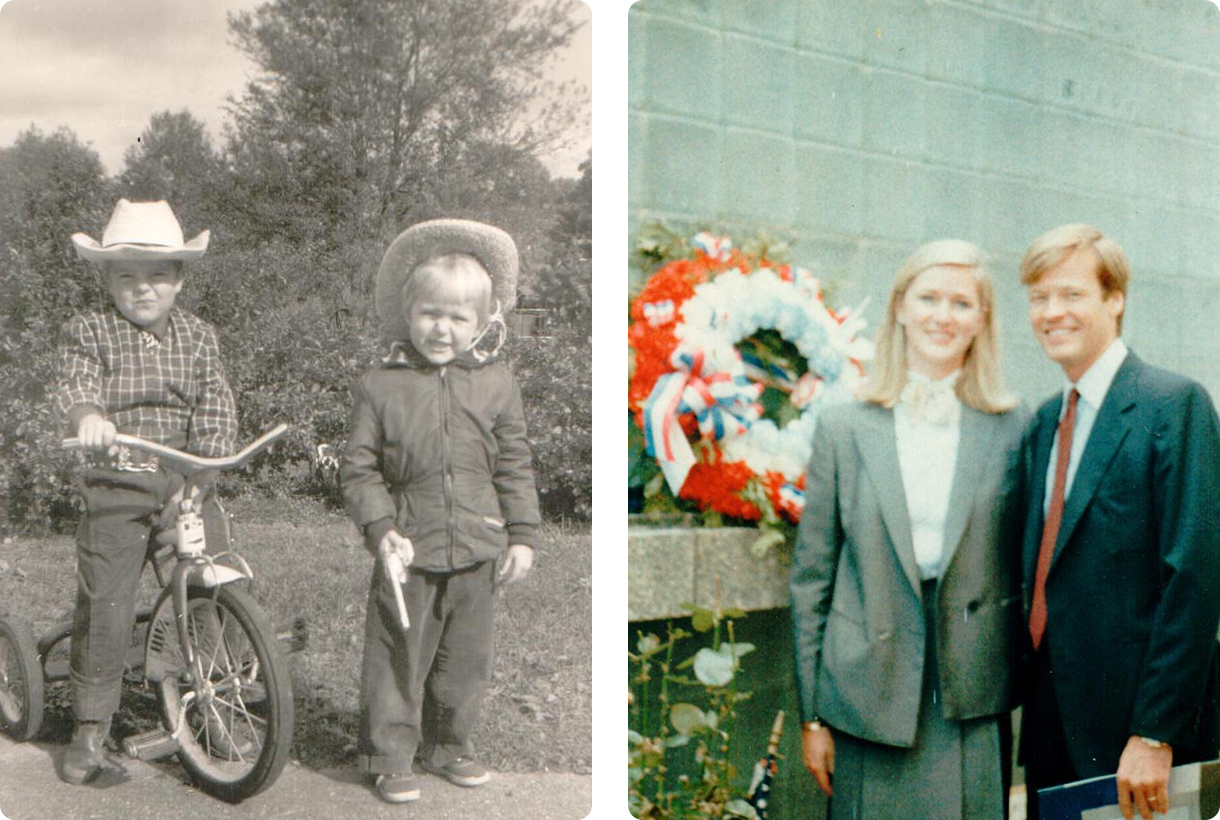 He felt very bad about the Vietnam Veterans, like Scott, and how poorly they were treated returning home from war, an experience which was so totally different from his own. He was very proud of Scott and deeply admired his work to rectify this negative sentiment against so many who had served and sacrificed for our country. My dad read the Commission’s book “Letters Home from Vietnam” in one evening, finally going to bed as the sun rose. At our wedding in 1985, he walked me down the aisle and kissed me, and then turned to Scott and gave him a big, resounding kiss on the cheek. Coming from this tough, six-foot-three Marine, we were all totally astonished. I never, ever saw him do that again!

Today, Lin oversees the internal staff at Veterans Advantage and helps manage the company's administration, human resources, branding, product development and new business initiatives. She also contributes regularly to the Veterans Advantage blog, The Service™, where she shares how she saves money on travel with VetRewards and TravelProtection™.

Military & Veterans Life Lin's Tips: Save More by Combining VetRewards Discounts with Coupons and Promotions One of my favorite ways to save more money using my VetRewards Card is to combine our Exclusive Vetrewards Discounts with manufacturers and in-store coupons or promotions. It’s pretty shocking how much you can save when you do this!
Military & Veterans Life Lin's Tips: The Military Spouse’s Guide to Sticking To a Strict Budget Learning to stick to a strict budget is important for anyone who is trying to pay off debt, plan for retirement, or save for a vacation or big-ticket life purchase. This can be especially true if you are a military spouse trying to make the most out of a servicemembers' salary.  To get back on track with your spending and establish healthy personal finance habits for the future, consider incorporating some of these tactics into your financial planning.
Military & Veterans Life Lin's Tips: My 5 Best Travel Hacks for Our Members As a military wife, mother, and businesswoman, I find myself flying often to negotiate new discount partners, spend time with family, and, every now and then, even take a vacation! Over the years I have had many negative travel experiences, and have learned a few tricks for making any trip I take more enjoyable and less stressful. Whether you manage a business like me or are taking a fun vacation with the family, I hope these tips will help you! Here are my top 5 hacks.
END_OF_DOCUMENT_TOKEN_TO_BE_REPLACED

Are you a Military or Veteran Wife and Mother like Lin Higgins?

Check out our Military and Veteran Life section for more helpful resources!