Admiral Charles R. Larson has unique experience across the spectrum of military leadership, education, management and government policy. Today, after decades of military service, he continues to serve, this time in Corporate America, as a member of the Board of Directors of Northrop Grumman, where he was elected in 2002.

In his early days at the U.S. Naval Academy, he forged a long and close friendship with Arizona Senator John McCain. "Best friends and classmates," is how Larson describes their friendship, and they remain close today.

Larson advanced through the Navy with a series of important roles and positions. He was the first Naval officer to serve as a White House Fellow.

As a special Naval aide to President Nixon, at the height of the Cold War, Larson was the "Black Bag Man," carrying with him the nuclear codes, as well as the responsibility for emergency relocation and evacuation of the President in case of nuclear war, together with all of his communications.

He later became Superintendent of the U.S. Naval Academy and held that post from 1983 to 1986. And in 1991, Admiral Larson became senior military commander in the Pacific.

He returned to the U.S. Naval Academy in 1994, where he served as Superintendent until 1998.

Looking back on his years of service, Larson appreciates the transformation of our fighting forces. "I think the military has to be part of society. We need to realize that we are not isolated individuals; we are parts of our communities. We have children, we have normal lives." 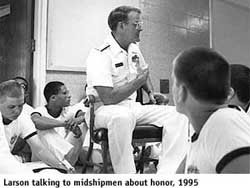 "Today our young people in many, many locations, particularly in the United States, are dispersed all over metropolitan areas. Much of their life and their activities are outside the military. There is school participation, there are PTAs, there are soccer coaches, and some serve on school boards," he said.

As a Veterans Advantage TopVet, we salute Admiral Larson’s service to our country, in top roles that span decades and Presidents.