Jennifer Aniston has had more success than most actors and actresses dream of, spending 10 years on the hit show “Friends” and moving on successfully to major films. It’s easy to forget that she comes from an acting family and, maybe more surprisingly, a military family.

The Emmy, Golden Globe, and SAG Award winning actress most recently appeared on the Friends Reunion, which is streaming on HBO Max this month. She was born in Los Angeles to actor parents Nancy Dow and John Aniston. Her mother acted on TV shows in the 1960s, and her father became an Emmy Award nominee for his role on the long-running soap, Days of Our Lives.

John Aniston was born in Greece and moved at an early age to settle in Pennsylvania with his family. He studied theater arts at Penn State University before enlisting in the Navy. He served as an intelligence officer on active duty in Panama and later in the Navy Reserve, attaining the rank of lieutenant commander.

Another military man, his best friend Telly Savalas, became Jennifer’s godfather. Savalas was drafted into the Army in 1941 and served two years in Company C, 12th Medical Training Battalion, 4th Medical Training Regiment at Camp Pickett, Virginia. He was discharged as a corporal after sustaining an injury from a car accident. Savalas was a Purple Heart recipient. 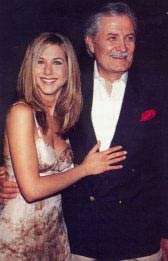 Jennifer attended Fiorello H. LaGuardia High School of the Performing Arts – the school profiled by the hit TV series "Fame" -- where she was active in drama.

It was clear early on that she had a knack for acting.

“Jennifer is a natural talent,” John, now 87, said about his daughter in a 1990 E! News interview, four years before she hit it big on “Friends.”

In addition to acting, Aniston has always been passionate about painting; one of her creations was even displayed in New York’s Metropolitan Museum of Art when she was 11. She bypassed college, against her father’s wishes, to pursue the bright lights of Hollywood.

"It’s not the kind of business anybody would wish on their child," John told People Magazine in the 90s. "It’s fine if it goes the way it has gone for her, but if not, it can be devastating."

In the late 80s and early 90s, the actress played a slew of small roles off-Broadway and films like “Ferris Bueller.” But her rise to stardom came in 1994 when she was cast as Rachel Green in “Friends.” For the next 10 television seasons, Aniston won audiences over as the spoiled but likeable New Yorker and love interest of Ross Gellar, played by David Schwimmer. In HBO’s “Friends” Reunion, for which she earned a reported $2.5 million, Aniston recently revealed that in the first season, she had a real life crush on Schwimmer.

Off screen, Aniston’s tumultuous relationships have been hot in the tabloids, with marriages and divorces from Brad Pitt and Justin Theroux. For many years, she’s had an estranged relationship with her parents but has recently repaired ties with her military father, who turns 88 this summer.

A source told the Daily Mail that “Jennifer didn't speak to him for ages but since the coronavirus crisis, she’s been on the phone with him almost every day. And not just brief conversations. It's like she realized life is very short and wants her relationship with John to be the best it can be. He's thrilled they have reconciled.”