Rick Rescorla was highly decorated for his battlefield bravery in Vietnam, even portrayed in a hit movie and popular book.

As the head of security of Morgan Stanley Dean Witter, he drilled employees regularly on evacuation from the Twin Towers, always believing it was vulnerable to a terrorist attack.

And when his predictions proved true on 9/11/2001, he was credited with saving thousands of lives at the expense of his own.

Rick Rescorla began that day as he usually did. He got up at 4:30 A.M., kissed his wife goodbye and took the 6:10 train to Manhattan. A combat veteran who fought in Vietnam’s bloody Ia Drang Valley, Rescorla was at his desk in a corner office on the 44th floor of the World Trade Center’s South Tower by 7:30 am. When the first hijacked plane slammed into the North Tower, Rescorla grabbed a bullhorn, ignored officials’ requests to stay put and led the company’s employees out of the building.

With professional class and heroic valor, he marched employees down the stairwell two-by-two. Some reports indicated he sang patriotic songs, just as he had done when boosting troop morale in Vietnam, to keep them calm. "Today is a proud day to be an American," he is said to have told co-workers.

His wife Susan got to speak with Rick one last time as events unfolded. 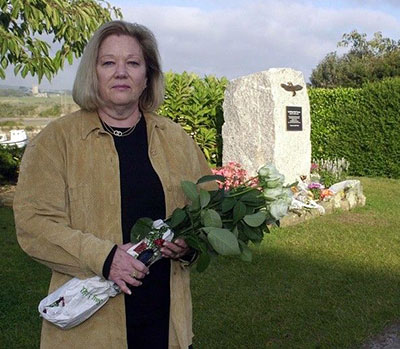 Susan Rescorla, today, at the memorial she helped build in her late husband’s honor.

“I kept calling and calling and when Rick finally called back, he said, ‘You’ve got to stop crying, if something happens to me, I want you to know – you made my life’. That was the last time we spoke,” she told the U.K. publication Mirror. All they have been able to retrieve from Rick was a charred military ID card.

By the time the second hijacked airliner hit the south tower at 9:07 A.M., most of the company’s employees were already out, with only a handful unaccounted for. Determined to get every employee out-like he did on the first attack on the World Trade Center in 1993 - Rescorla and two assistants went back to look for them, never to return. He was last seen on the 10th floor of the burning tower. 2,700 people owe their lives to Rescorla and his heroic efforts that day.

Rick Rescorla was born on May 27th, 1939 in Hayle, England and came to the United States to enlist in the Army in 1963. He was a key figure in the groundbreaking Vietnam War book "We Were Soldiers Once...and Young," which was turned into a movie starring Mel Gibson that debuted nationwide in April 2002.

Rescorla earned a Silver Star, a Purple Heart and Bronze Stars for Valor and Meritorious Service. He became a U.S. citizen in 1967, earned college and law degrees, got married, had children, divorced, remarried and found midlife success on Wall Street as vice president of security at Morgan Stanley Dean Witter.

Aside from his military experience, Rescorla, who died at sixty-two, had worked for British intelligence, conducting special operations in some dangerous places. He was reported to have given prescient warnings to Port Authority officials that the Twin Towers were vulnerable to a terrorist attack.

In an interview with the National Review, R. James Woolsey, former director of Central Intelligence, saw Rescorla as the kind of person urgently needed by U.S. intelligence. An iconoclast and strategic thinker who wasn’t afraid to buck the system, Rescorla "is an example of somebody who should have probably been at the top of the intelligence community, but wasn’t," Woolsey said.

"He’s a perfect example of the kind of guy that the Germans say has fingerspitzengefühl - fingertip feel" or intuition, he said. "God, it would have been wonderful if he had been the head of the DO’s [the CIA’s Directorate of Operations] counter terrorist operations, but at least he saved 2,700 people."

Nowadays, his wife Susan Rescorla has chosen to honor her husband’s legacy. She accepted a Presidential Citizens Medal on Rick’s behalf at a White House ceremony in 2019.

With two friends, she created The Richard C. Rescorla Memorial Foundation, as she says "to keep present the magnitude of Rick’s life and to promote the virtues Rick lived by – duty, honor and courage."

The foundation's first achievement was the bronze statue erected of Rescorla at the new National Infantry Museum at Ft. Benning, Georgia, after commissioning prominent sculptor Edward Hlavka to create the work. Other Hlavka commissions include President George Bush, President Thomas Jefferson; and Christ with two children.  More on the statue here.

Susan Rescorla has also helped people understand how truly wonderful her husband was. “Touched By A Hero”, written by Susan Rescorla, is an inspirational journal that explains the sacrifices Rick made to safely evacuate nearly 2,700 people from the World Trade Center during the terrorist attacks. It is a journal that will preserve Rick’s legacy, as well as inspire those who read it.

"I am so very proud to have had him in my life. I want to have his legacy live on," his wife said.