“The only way I was going to make full colonel is if I became Colonel Sanders. Which I did,” joked Rob Riggle. The comedian known for roles in television and film staples like SNL, The Daily Show, and The Hangover served 23 years in the Marine Corps as a Civil Affairs Officer and Public Affairs Officer. Lieutenant Colonel Riggle was awarded more than 21 medals and ribbons in his nine years of active duty and 14 years in the reserves, retiring from the military in 2013.

Born Robert Allen Riggle Jr., he was raised in Kansas and earned his B.A. in Theater and Film from the University of Kansas. He enlisted while in school there in 1990 and attained his pilot’s license, going on to pursue a Master of Public Administration degree from Webster University in 1997. But he left flight school to further his comedy career.

When asked where he was around the time of September 11, he said “I was at the Upright Citizens Brigade Theater in New York doing 1ame improv jams for nine drunks in the audience. I was doing sketch shows and anything I could do to get stage time.” He sensed he would be activated from the reserves and spent time helping to clear the rubble at Ground Zero. He started work immediately the next day, 9/12/2001, and worked throughout the month before re-enlisting in active duty and being deployed to Afghanistan by November.

“Like most Americans, I was pissed off,” he told We Are the Mighty. “But as a Marine captain, I could do something about it. I put my hand in the air and told my commanding officer, ‘put me in this thing.’ And so he did.” Just a few weeks after receiving orders, Riggle was on his way to Afghanistan, where he served two rotations.

He took his service seriously despite being the jokester.

“You want to instill confidence in your Marines, so I never was a jackass but I never changed my personality either. If something’s funny, I’d crack wise then but for the most part I tried to keep two hats, one comedy hat and one Marine hat.” 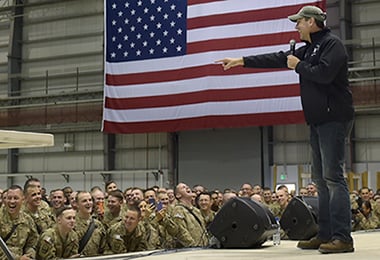 Rob Riggle performing for troops with a USO show at Bagram Airfield, Afghanistan, in 2014 (Department of Defense Photo)

Upon returning to New York, he was cast in a season of SNL, which launched him to comedy fame. He became a correspondent on The Daily Show for two seasons and was cast in a recurring role on Modern Family. In film, he worked on movies including Talladega Nights: The Ballad of Ricky Bobby, The Hangover, and Dumb and Dumber To.

He has used his celebrity to help support the military community. For four years he partnered with Semper Fi & America's Fund to host the InVETational Golf Classic.

“The InVETational celebrates two of my greatest passions in life – veterans and golf," he said. The event brings veteran golfers together to raise money to provide urgently needed resources and support for combat wounded, critically ill and catastrophically injured members of the U.S. Armed Forces and their families.

He also credits a lot of lessons he learned as a Marine for helping his acting career.

Riggle currently co-hosts the extreme miniature golf game show series Holey Moley  on ABC on Thursdays at 8pm EST, which just completed its third season in September and has been renewed for an upcoming fourth season.