With the 20th anniversary of the September 11 attacks, we recognize those lost that day at New York's World Trade Center and the Pentagon in Washington, DC in 2001. To many, NYPD officer Luis Alvarez (pictured above, in 2007) is the hero for those who still suffer from the health consequences of that horrific event.

Marine Luis Alvarez died nearly 18 years after that fateful date, of colorectal cancer, a victim of contaminants at the World Trade Center when he was one of the first responders at the scene. He spent three months at "Ground Zero" in lower Manhattan after the attacks. His dying legacy was to secure continued financial assistance for 40,000 emergency personnel and others affected by the attacks. 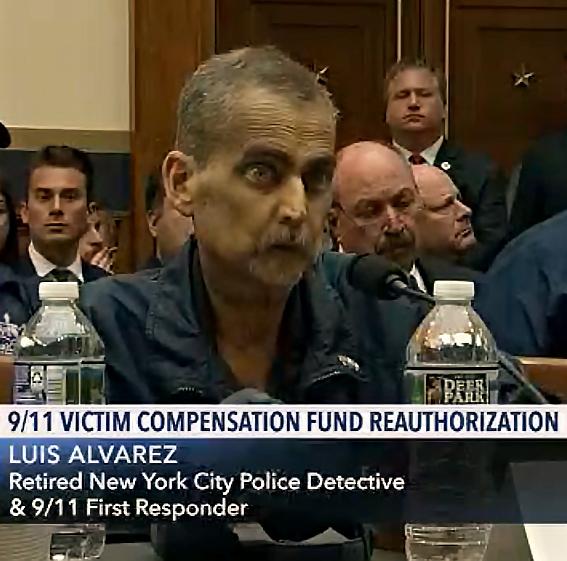 The fund initially lapsed in 2004 and was reactivated in 2011, but was quickly running out of money, forcing administrators to cut benefit payments significantly. The extension, passed by Congress and signed by former President Trump just over two years ago, provides coverage through the year 2092.

Speaking before a House committee just before congressional passage of the extended benefits, Alvarez delivered a memorable and passionate statement: "I will not stand by and watch as my friends with cancer from 9/11 like me are valued less than anyone else because of when they get sick. You made me come here the day before my 69th round of chemo. I'm going to make sure that you never forget to take care of the 9/11 responders."

"We were there together with one mission, and we left after completing that mission," said Alvarez. "I have been to many places in this world and done many things, but I can tell you that I did not want to be anywhere else but ground zero when I was there," he added.

Alvarez was joined by fellow first responders and comedian Jon Stewart, who has also been a strong advocate for the fund's extension.

The hearing that day was an emotional one. Alverez was extremely frail and it was clear his health had declined rapidly. The following day doctors determined he was unable to withstand his 69th round of chemotherapy and after checking into hospice, Alverez died less than a week later.

"No person who responded on 9/11, or who worked to the point of exhaustion during the lengthy rescue-and-recovery period that followed, should ever need to beg our elected officials to act. But I'll tell you this: We can thank God it was Luis Alvarez who stepped forward to make the demand on behalf of every citizen and resident of our country," former New York Police Commissioner James O'Neill said at the funeral service.

O’Neill also reminds us of some staggering statistics. Twenty-three NYPD officers died on 9/11 and as of the time of his statement, 222 NYPD officers, including Luis Alvarez, have passed away from 9/11 related illnesses. The number of dead has since been raised to over 240. In addition, over 500 have contracted various ailments and life-threatening diseases.

The $7.3 billion fund would have run out of money in 2020 without this vital extension enacted into law.

The official name for the funding extension also memorializes Alvarez's legacy, as well as those of two other fellow responders who have since died. It is called the "Never Forget the Heroes: James Zadroga, Ray Pfeifer, and Luis Alvarez Permanent Authorization of the September 11th Victim Compensation Fund Act."