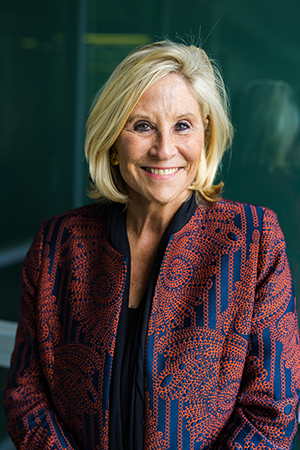 The National Women's Hall of Fame celebrated their 30th induction this past weekend by honoring nine amazing women, including those touched by military service. The 2022 Inductees included Brig. Gen. Rebecca Halstead, a West Point graduate and its first female graduate to reach the rank of General Officer.

2017 Inductee LT. General Carol Mutter, the first U.S. Marine Corps. woman to earn a 3-star rank, presented Brigadier General Rebecca Halstead with the 2022 medal for her induction. During her nearly three-decade career in the U.S. military, Halstead achieved multiple historical milestones. In 2004, she became the first woman in U.S. history to command in combat at the strategic level in her role as senior Commanding General for logistics in Iraq. 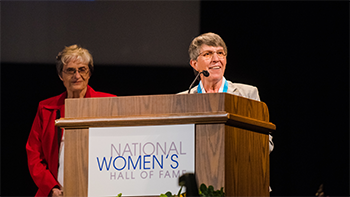 Halstead graduated from the United States Military Academy in 1981, a member of the second Academy class that included women, and reached the rank of Brigadier General in 2008. That same year, she received an honorary doctorate from Gettysburg College.

Halstead quoted Susan B. Anthony in her induction speech, and went on to stress the importance of “Faith, Family, Friends, and Freedom” as the foundation of her success. She topped off her speech with encouraging words she learned growing up, “It was not always an easy path, but as I learned as a young girl, there are two rules to life. Rule number one, don’t quit. Rule number two, refer back to rule number one.”

2003 Inductee, Veterans Advantage Advisory Board member for 20+ years, and two-time Olympic Gold Medalist, Donna de Varona, presented Mia Hamm with her 2022 induction medal, detailing Mia’s many accomplishments on and off the field: 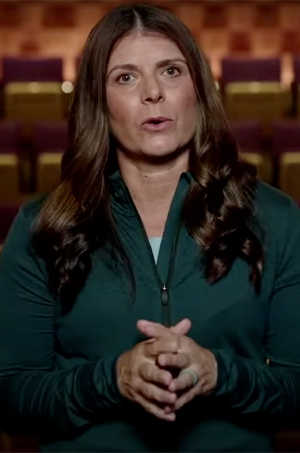 While chronicling the U.S. women’ historic victory at the 1999 FIFA Women's World Cup, led by Hamm, de Varona said,  “These players not only won battles on the pitch, they fought battles together, for equal pay, a place at the bargaining table, respect, and finally, as of now, a viable, professional, soccer league of their own… no wonder Mia was the very first woman to be inducted into the World Football Hall of Fame, this beautiful game now belongs to just everyone.”

As Mia accepted her medal virtually, she thanked the National Women's Hall of Fame and her fellow inductees for their inspirations and contributions. She mentioned her duty to inspire others, especially women to "dream as big as possible." She noted how women have now achieved equal pay from U.S. Soccer, while reflecting on how she and her teammates once had to drive their own vans to games.

Mia closed her speech with encouraging words for her daughters and young girls worldwide: "When you find yourself speaking in front of a group or supporting a cause or defending a friend, you might be nervous.I want you to understand that the wavering you have in your voice isn’t fear or doubt, but the realization in your own power, your own strength, and in your own worth, embrace it.”

Hamm's father was a U.S. Air Force pilot, and on tour, she often shared her experiences of military life, and how it developed her.

"I remember moving around all the time, facing the challenges of a deployment," Hamm told Fort Eustis youth in 2013. "I played soccer because my friends played soccer, and it was my way of getting involved in the community."