Veterans Advantage’s Board of Advisors is an impressive group of men and women who help us better serve the military and veteran community.

Our advisors distinguished records range from Medal of Honor recipients to Fortune 500 business leaders, retired U.S. Army Generals, and Gold Medal Olympians. Most importantly, our board members are veterans or from families who have served, just like yours. They are deeply invested in our mission of bringing military and veterans the respect, recognition, and rewards they deserve.

We would love to introduce you to them: 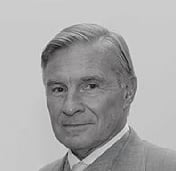 Captain Paul W. Bucha
Paul W. Bucha is a Congressional Medal of Honor recipient who served as an Army Captain and Ranger during the Vietnam War, 1965-1972, and as a member of the New York City Vietnam Veterans Memorial Commission from 1981-1985.

Mr. Bucha is a 1965 graduate of the United States Military Academy at West Point. As Commanding Officer of Company D, 3rd Battalion, 101st Airborne Division in 1968, Captain Bucha was awarded the Medal of Honor for conspicuous gallantry and intrepidity in action while leading his troops against enemy forces near Phuoc Vinh, Republic of Vietnam. He also was awarded the Bronze Star, a Purple Heart, Vietnam Cross of Gallantry, the Army Commendation Medal, the Civic Action Medal, the National Defense Service Medal, and the Vietnam Service Medal.

Upon returning from Vietnam, Mr. Bucha earned his MBA from Stanford University in 1974. Later, he served as the Chairman of the Board of the Wheeling-Pittsburgh Steel Corporation. He has also served in a number of senior executive level leadership positions within several industries including real estate, international trade, international licensing, manufacturing, marketing hospitality and defense contracting.

Mr. Bucha served as President of the Congressional Medal of Honor Society. He is a Founding Fellow of The Cleveland Clinic Foundation; former Director of the West Point Society and the Asian Institute at Jersey City State College. He is a Distinguished Graduate of West Point, NCAA All-American swimmer, the recipient of the NCAA Distinguished Service Award, the International Swimming Hall of Fame Gold Medal, and the Ellis Island Medal of Honor.

Gerry Byrne
Gerry Byrne served as a Marine Corps Officer in Vietnam in 1968-69 and was awarded the Combat Action Ribbon and the Navy Achievement Medal with Combat V. He was a member of the New York City Vietnam Veterans Memorial Commission.

Mr. Byrne is Vice Chairman of Penske Media Corp (PMC), which owns leading entertainment and digital media brands that include Variety, Deadline Hollywood, and Hollywood Life. A graduate of Fordham College, Byrne now serves on the Board of Overseers of Fordham University Graduate Business School. He is on the boards of numerous military and veteran organizations, including Fisher House Foundation, The Intrepid Museum, The Bob Woodruff Foundation, among others.

With the support of a mayoral proclamation and Veterans Advantage in November 2012, Mr. Byrne also launched the first-ever Veterans Week NYC, a series of events dedicated to honoring and supporting veterans and their families that is now celebrated annually.

Donna de Varona
Donna de Varona first made her mark at age 13 as the youngest participant in the 1960 Olympic Games. Four years later, she broke an unprecedented 20 world swimming records and won two Gold Medals at the Olympics in Tokyo.

Ms. de Varona went on to an accomplished career as an Emmy Award-winning network television sports personality, providing expert commentary on ABC's "Wide World of Sports" and a host of winter as well as summer Olympic broadcasts. She has been widely recognized for her work as an advocate of women's sports including the passage and defense of Title 9, she received the 1992 American Woman Award from the Women's Research and Education Institute. Long active in the Olympic movement, she was awarded the Olympic Order, the highest award of the Olympic Movement for her distinguished contributions to the Olympic Movement.

Her father served in World War II as a combat medic for the Red Cross. She has traveled throughout Vietnam in a USO tour for the troops, and more recently, visited our men and women in uniform on leave in Qatar.

Mr. McFarland served as Assistant Secretary for Information and Technology in the Department of Veterans Affairs from 2004-2006, where he developed the plan to centralize the department’s IT operations.

Prior to his government service, McFarland was Vice President & General Manager of the Government Sector at Dell Inc. Under McFarland’s leadership, Dell became the No. 1 supplier of computer systems to the Federal Government. In 1998, McFarland was named one of the “Federal 100” – a joint government and industry award designating the top 100 executives in the Federal marketplace. McFarland’s 30+ years in industry also included senior executive positions with other leading high-technology enterprises.

General Miller was Vice President of Public Operations at Dell Inc., serving in a variety of leadership positions that included operations, sales, engineering and contracting.

He holds a Bachelor’s Degree in Business Administration from the University of Washington and a Masters Degree in Systems Management from Troy State University.

He enlisted in the Marine Corps in 1965 and, following a tour of duty in Vietnam, was accepted to Officer Candidates School. He later served in Korea and during Operation Desert Shield/Desert Storm.

In 1993, he was promoted to brigadier general and became Commanding General of the Marine Air-Ground Task Force Warfighting Center at the Marine Corps Combat Development Command in Quantico, Virginia. A year later, he added another star, and in 1997 was elevated to lieutenant general.

Edward H. Vick
Ed Vick is a highly decorated Naval officer who spent two years in Vietnam commanding river patrol boats. He earned two Bronze Star medals with combat "V," the Combat Action Ribbon, a Presidential Unit Citation, and the Vietnamese Cross of Gallantry, among other awards. He has long been active in Vietnam veterans' causes. Mr. Vick served on the Executive Board of New York Vietnam Veterans Memorial Commission, where he created the widely acclaimed campaign “It’s Time”.

As the former Chairman and CEO of Young & Rubicon, Ed Vick is one of the few leaders in advertising who can claim "Agency of the Year" honors while at the head of two different agencies -- Ammirati & Puris in 1986 and Y&R on several occasions.

Mr. Vick is a member of the Council on Foreign Relations, the St. Andrews Society, the Military Order of Foreign Wars, Vietnam Veterans of America, the Ends of the Earth Society, and is Chairman Emeritus of the Iraq and Afghanistan Veterans of America.

He holds degrees from the University of North Carolina and Northwestern University.

Discounts & Benefits Scott’s Corner: Black Friday and Cyber Monday Deals with Veterans Advantage I hope you had a Happy Thanksgiving! Now, the fun starts. With today being Black Friday, and Cyber Monday this coming Tuesday, you’ll be inundated with deals to help round out your gift-giving list for your friends and loved ones.
Military & Veterans News Scott’s Corner: Recognizing Veterans Week Partners With another memorable Veterans Day behind us, we want to recognize our event sponsors, partners and supporters who provide valuable savings for our members.
Military & Veterans News Cover Story: Heroes Meet Heroes 2021 In Honor of Veterans Day 2021, Veterans Advantage hosted its annual Heroes Meet Heroes event on Zoom on November 10. The event, which started nine years ago, brings together a diverse panel of Olympic athletes and veterans in inspirational conversation.
Discounts & Benefits Scott's View: Veterans Advantage Answers the Most Pressing Needs of our Military & Veterans I hope you had a memorable and restful Veterans Day.