Actress, director, and producer Elizabeth Banks has a military family, and she proudly brought that connection to Hollywood.

Banks’ father, Mark P. Mitchell, served in the Navy during the Vietnam War and then became a factory worker for General Electric. Banks enjoyed sports as a kid, and initially had childhood visions of being a sportscaster.

Mark and his wife, Ann, raised Banks and her three younger siblings in Pittsfield, MA, and they all come from a military family.

“My grandfathers, uncles & father all served & came home safe. Love, gratitude, remembrance for the fallen and their families,” she tweeted on Memorial Day 2017. 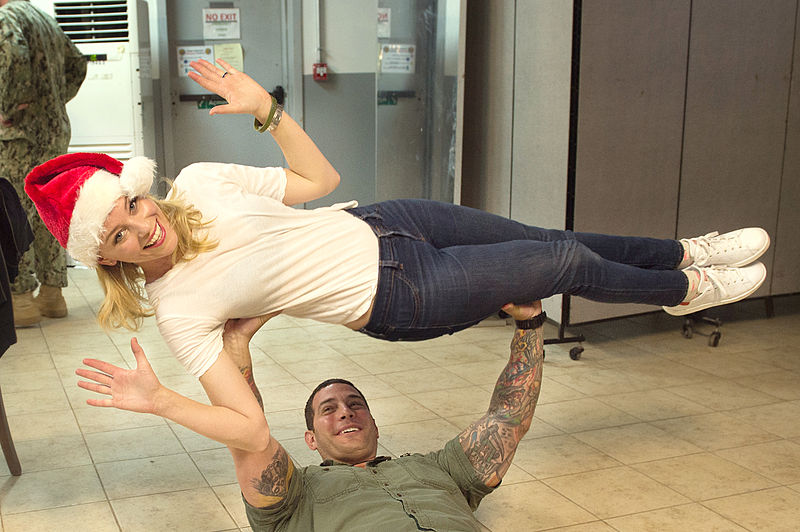 Elizabeth Banks is “bench pressed” by a US service member after a USO show at Camp Lemonnier, Djibouti in 2015 (Department of Defense photo)

Banks’s father served in the Navy in the Mekong Delta during the Vietnam War, and she recalls the challenges of military service as the reason why she has chosen to be a regular on USO Tours today. “My father tells very few stories about Vietnam, but he tells a story about when he left Vietnam and was transferred to the eastern [Mediterranean Sea],” she said.

“His ship hosted David Niven and his very hot and considerably younger wife. That’s what he remembers. He remembers that day very fondly and not many others,” Banks said. “And I really felt if I could make someone’s deployment feel a bit more like home -- feel special, give them a special day they can focus on rather than the bad -- then that is definitely worth my time.”

As a teen, she tried out for a school play and sparked her interest in acting. She went on to graduate from the University of Pennsylvania with a minor in theater arts and then earned her MFA from the American Conservatory Theater in San Francisco. Banks changed her last name from Mitchell when she joined the Screen Actors Guild. Her acting debut came with a role in the independent film “Surrender Dorothy” in 1998, but she became more widely known for a part in the 2005 comedy film “The 40-Year-Old Virgin.”

She went on to a series of television roles, notably nominated for an Emmy Award for an appearance on “30 Rock.” Her list of films includes “Spiderman,” “Seabiscuit,” “What to Expect When You’re Expecting,” and “The Hunger Games” franchise.

In 2015, she used her talents to entertain the troops overseas.

“I went on a USO Tour to Afghanistan, Bahrain, Italy, Djibouti, and Germany,” she told Jimmy Kimmel. “It was life changing. It was amazing. You get to be with our troops. I felt like it was the least I could do as an American citizen, especially at the holidays when you know they’re not going to get to go home and be with their families, so we get to bring a little bit of American fun to them.” She hosted the USO program with Chris Daughtry headlining.

“When we got to Afghanistan they told us, ‘We’re going to do a maneuver to make sure that you can’t get hit by missiles.’ Just hearing that sentence we’re like, we’re what? What are we doing?”

The experience was so meaningful to her that she used it as inspiration for the movie “Pitch Perfect 3,” which she co-produced and starred in. The film follows a group of teens singing on a USO tour. “Participating in a USO tour is such a unique honor, and my experience was so inspiring that I wanted it to be part of the next ‘Pitch Perfect’ movie,” she said.

The USO partnered with Universal Pictures in 2017 to host service members at the “Pitch Perfect 3” premiere in Los Angeles, delivered a special USO tour to Joint Base McGuire-Dix-Lakehurst, New Jersey, and held an exclusive screening for troops in Georgia.

Banks currently hosts the game show “Press Your Luck” on ABC, which recently started its second season. The show airs Wednesdays at 8pm.