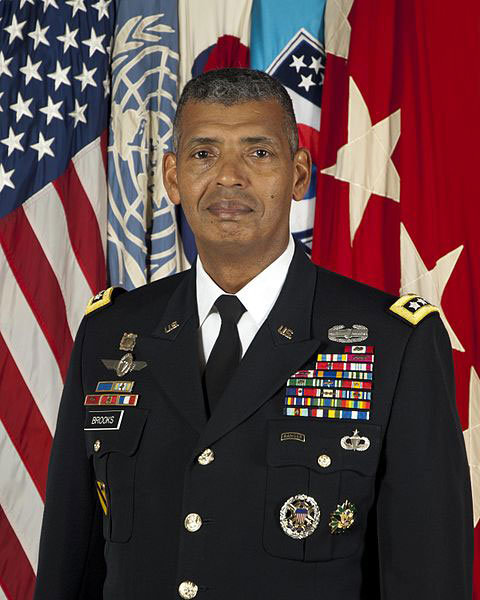 To choose one word to describe U.S. General Vincent Brooks is difficult, but most members of the press would agree that the commander of United States Forces Korea is the epitome of “unruffled.” As noted in our previous profile of Brooks in 2003, no matter the situation, Brooks’ demeanor is cool, calm and collected. His serious attitude reflects his family’s extraordinary military accomplishment and service to our country.

A Strong Military Family
Brooks’ father and brother, Leo Sr. and Jr., both earned the title of General, making the Brooks family the first African American family in history to have three generals in two generations.

"I'm from a family who believed that the way out of the oppression of our society in the '20s, '30s and '40s was education," Leo Sr. said to The Washington Post during a rare interview. "Each of my brothers and sisters went to college. All my life, I've taught my children a series of things. One, you are responsible for your behavior. Two, our society requires more of you than it does of other people, and you have to prepare twice as hard to get the playing field level."

These values were obviously instilled in Vincent from a young age. During his senior year at West Point, he was chosen to serve as the Cadet Brigade Commander of the U.S. Corps of Cadets, the highest leadership honor a cadet can hold. He was the first African American to receive the honor. In 1980 he graduated from West Point as the first black valedictorian.

Vincent has a deep understanding of how deeply racial prejudice can be ingrained in a society, but it has never let it prevent him from reaching his goals.

"It was a reminder then--as it remains a reminder now--that the work is not done that causes people to just be measured by the content of their character, not by the color of their skin.

There’s still work to be done. So, I carry that with me as well," he said.

After graduation, Vincent went on to earn dozens of medals for his military service in Korea and Kosovo, including several bronze stars and the Army Distinguished Service Medal. He currently serves as the Commander of the United Nations Command, Combined Forces Command and United States Forces Korea. Previously, he was a key player in the Iraq War, briefing the press regularly as the Army’s Deputy Director of Operations, and became somewhat of a household name.

"If you look at the Korean Peninsula, we see a rapidly developing capability being pursued by Kim Jong-un as the current leader of North Korea," he has said of the growing tensions. "It's very clear in what direction Kim Jong-un is heading and that is to have a full arsenal of capability that can hold the United States at risk for deterrence purposes, but also for coercive diplomacy.”

"As I have observed the men and women of this command, it is obvious that we have the right people, in the right place, and trained as a strong team," Brooks said of the United States Forces Korea site.

Family Man
Vincent Brooks is a family man with a rich personal life. He is close with his mother, father, brother and sister and cares deeply about them. During his time in Iraq, his mother sent him emails and care packages of his favorite junk food.

"It was encouraging to know I had somebody there if it felt like a bad day in front of the cameras," he said. "It was the 21st-century equivalent of letters from home."

Brooks enjoys spending down time with his wife, Carol, who holds down the fort at their Northern Virginia home and works as a physical therapist. "Contrary to what it might seem - the hardened exterior - I’m truly a hopeless romantic, “ he says.” If quality time means sitting down and watching ‘Def Comedy Jam’ or watching the Lifetime Movie Channel - anything she’s interested in, it’s good enough for me."

Veterans Advantage Awards Scott's View: National Military Spouse Appreciation Day Every year, on the Friday before Mother’s Day, we honor spouses of our U.S. military through National Military Spouse Appreciation Day. Today’s that day!
Veterans Advantage Awards VetFamily: Kathryn Cross Kathryn Cross truly lives a life of devotion to our country, and its women and men who served it. She was born on an Air Force base, and has a rich family history of military service, including her dad who served during the Korean War as a flight instructor. She encouraged her firstborn to join the Navy as an aspiring SEAL, and he once proudly told his mother, “I am a lifer Ma, I love what I do!”
Discounts & Benefits Scott's View: Getting Ready for National Military Appreciation Month As the calendar changes from April to May, we turn our attention to one of my favorite times of the year: National Military Appreciation Month.
Discounts & Benefits Scott's View: Mother’s Day Discounts Veterans Advantage We hope you enjoyed today’s VetFamily feature story about Jimmy Fallon. As one of the most widely watched TV personalities in America, he helps bring smiles to millions, especially important this past year. There are 2 veterans in Jimmy’s life - his father and his father-in-law.