This November of firsts is not limited to the presidential election. Our military has its own historic event to report. General Ann E. Dunwoody (right) ascended last week from humble beginnings 33 years ago at Fort Sill, Okla., to the never-before achieved elite level of four-star general.

At an emotional promotion ceremony, Dunwoody added a fourth star and, looking back on her years in uniform, said it was a credit to the Army that she was given a chance to rise through the ranks in a male-dominated military.

“I never grew up in an environment where I even heard of the words ‘glass ceiling,’" General Ann Dunwoody said. “You could always be anything you wanted to be if you worked hard, and so I never felt constrained. I never felt like there were limitations on what I could do,” she added.

"There is no one more surprised than I — except, of course, my husband. You know what they say, 'Behind every successful woman there is an astonished man.'" Call it an “interservice marriage,” too. Her husband, Craig Brotchie, served for 26 years in the Air Force.

At Fort Belvoir, Va. — her birthplace — Dunwoody was sworn in as commander of the Army Materiel Command, responsible for equipping, outfitting and arming all soldiers, a promotion from her deputy commander’s role there. The position stands as a key position in the multifront war on terror.

There are 21 female general officers in the Army — all but four at the one-star rank of brigadier. It was not until 1970 that the Army had its first one-star: Anna Mae Hays, chief of the Army Nurse Corps.

Women now make up about 14 percent of the active-duty Army and serve in a wide variety of assignments. They are still excluded from units designed primarily to engage in direct combat, such as infantry and tank units, but their opportunities have expanded enormously over the past two decades. 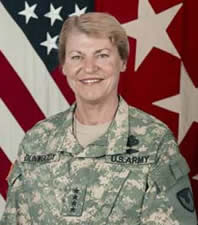 Background
In an Associated Press interview after the ceremony, Gen. George Casey, the Army's chief of staff, said that if there is one thing that distinguishes Dunwoody, it is her lifetime commitment to excelling in uniform.

"If you talk to leaders around the Army and say, ‘What do you think about Ann Dunwoody?’ almost unanimously you get: ‘She's a soldier,’" Casey said, adding that he admires the fact that, "she's a soldier first."

Dunwoody hails from a family of military men dating back to the 1800s. Her father, 89-year-old Hal Dunwoody — a decorated veteran of World War II, the Korean War and Vietnam — was in the audience, along with the service chiefs of the Army, Navy, Air Force and Marines, plus the Joint Chiefs chairman, Adm. Mike Mullen. He received Purple Heart medals for wounds suffered in the Korean and Vietnam conflicts. He wears the Army’s Distinguished Service Cross for valor. The general’s father graduated from the academy in 1943, following in the steps of his father, who graduated in 1905. Dunwoody’s great-grandfather graduated from West Point in 1866.

“Now you understand why people think I have olive-drab blood,” Dunwoody joked.

Dunwoody received her Army commission after graduating from the State University of New York in 1975.

Her first assignment was to Fort Sill, as a supply platoon leader in June 1976, and she remained at Sill in various positions until she was sent to quartermaster officer school at Fort Lee, Va., in July 1980.

She later served in Germany and Saudi Arabia.

After graduating from the Command and General Staff College in 1987, she was assigned to Fort Bragg, N.C., where she became the 82nd Airborne Division's first female battalion commander.