WASHINGTON -- New York City subway hero and Navy veteran Wesley Autrey was hailed by the President and Congress Tuesday night -- another honor to go along with his medal, his 15 minutes of fame, and the admiration of millions for risking his life to save a man from an oncoming train.

President Bush hailed Autrey for his act of bravery three weeks ago in Harlem, when he saw a man fall onto the subway tracks, leapt down to get him, and held the man in a space between the rails as the train roared over them.

"There is something wonderful about a country that produces a brave and humble man like Wesley Autrey," the president said, prompting a long standing ovation from the lawmakers.

Showing he knows how to enjoy a moment as well as save a life, Autrey soaked it up.

He stood to acknowledge the crowd and the president, pointing and blowing kisses. As the crowd continued to roar its approval, he leaned over to shake Laura Bush’s hand and that of Lynne Cheney, the wife of Vice-President Dick Cheney.

The 50-year-old construction worker was joined by his two young daughters, who witnessed their father’s death-defying leap and have joined him at public ceremonies honoring him.

The tribute to Autrey was a lighter moment in a speech that drew plenty of partisan responses from the newly-empowered Democrats and the Republican minority, on issues ranging from medical lawsuits, energy, and Iraq.

"That’s wonderful. Often times people have a misconception of New Yorkers, of their willingness to put themselves in harm’s way, and he’s a great example of a true New Yorker," said Crowley, who added he’s willing to work with Bush on improving immigration policy. 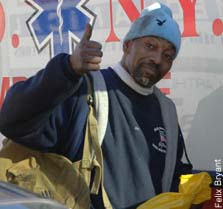 But Crowley said the president "still has not gotten the message" of the public’s unhappiness over the Iraq war, and said he is skeptical of the president’s plan to use the tax code to lower the cost of health insurance.

One of New York’s newest lawmakers, Rep. Michael Arcuri, D-Utica, had a positive impression of his first State of the Union speech.

"I was glad to hear the president talk about energy. I certainly hope that this year it’s more than just talk," said Arcuri, D-Utica. "I think the president’s talking about the right things. now hopefully we can work together and do some good things."

The state’s newly minted presidential candidate, Sen. Hillary Rodham Clinton, offered a harsh assessment of Bush’s performance so far and his formulas for the future.

"There is no doubt that the state of our union needs to be much stronger," said Clinton. "We face tremendous challenges in Iraq and Afghanistan, continuing threats to our national and homeland security and crises here at home in health care and energy.

But tonight, the President fell far short of the vision and solutions needed to meet these challenges and move our country forward."

"Overall I think it was an excellent speech," said Rep. Nita Lowey, D-Westchester. "I was pleased that the president addressed our energy needs ... better late than never."

Rep. Kirsten Gillibrand, D-Hudson, said she was encouraged "by his discussion of reducing gasoline consumption. I think that’s an excellent first step," before adding that she was disappointed by what she called Bush’s "lack of focus" in his remarks on Iraq.

Brooklyn’s Edolphus Towns found the speech lacked "a way to assist with the survivors of Hurricane Katrina and the rebuilding of the Gulf Coast states."

Rep. Peter King, R-Long Island, said he thought Bush "did a solid job of explaining why he needs time to make this new strategy in Iraq work," though he questioned the effectiveness of the president’s plan for health insurance tax discounts.

Another Republican, Thomas Reynolds, rapped Democrats for offering "slogans instead of serious long-term solutions," and called Bush’s energy agenda "bold and responsible," and a potential economic boon for his western New York region.

Many New York Democrats came out swinging at the president, whose poll ratings have plummeted due largely to dissatisfaction with the Iraq war and Bush’s determination to send more troops.

The president’s remarks on the Iraq war did not sit well with Sen. Charles Schumer, D-N.Y., who voted to authorize the invasion but said the president is headed in the wrong direction.

Bush "is standing by his plan that has been rejected by just about everyone else -- the American people, the Congress, so many of our top generals, and even Prime Minister Maliki," Schumer said.

"An escalation without any change in course makes no sense and will be rejected by Congress and the American people."

Rep. Maurice Hinchey, D-Hurley, a harsh critic of the Iraq war since it’s inception, said the president’s words on Iran were reminiscent of his warnings about Iraq, but said this time the audience was far less receptive.

"This Congress is deeply, deeply more skeptical, and on both sides of the aisle, not just the Democrats," said Hinchey.