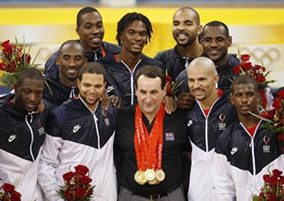 From captain of West Point’s basketball team to a captain in the Army and on to coach Duke’s extraordinary Blue Devils for over three decades, Mike Krzyzewski’s lifetime of leadership is admirable. Coach K, as he is known, recently announced his retirement after 47 years of coaching. He will complete the upcoming 2021-2022 season of college basketball and retire at age 75 to spend time with family.

Krzyzewski was born in Chicago to Polish parents: Emily and William Krzyzewski. They were supportive parents who knew the value of education and the importance of values; they sent him to Catholic school before he was accepted to West Point.

Coach K’s “Redeem Team” Brings America Back to Olympic Glory “When I was first presented the opportunity to go to West Point, I wouldn’t have taken it without their belief. I was afraid, and I was afraid when I was there. But their belief was always behind me,” he said during his retirement press conference in early June.

At West Point, he played basketball while training to become an Army officer. Captain of the Army basketball team in his senior season, 1968-69, Mike led them to the National Invitation Tournament (NIT) under coach Bob Knight. On graduation day in 1969, he married "Mickie" Marsh in the Catholic chapel at West Point.
Following graduation, he served in the Army from 1969-74. Among other assignments, he served as a field artillery liaison to the infantry at Camp Pelham in South Korea (now renamed Camp Garry Owen). Mike directed service basketball teams for three years and then for two years served as the head coach of the U.S. Military Academy Prep School at Fort Belvoir, Virginia.

In 1974, he left the Army with the rank of captain. His former coach, Bob Knight, offered the then 26 year-old Krzyzewski a graduate assistant position at Indiana University. That 1975 “Hoosier” squad posted an 18-0 Big Ten mark and an overall record of 31-1.

The following year, Mike returned to West Point to coach the Army team for five seasons, leading the Cadets to a 73–59 record and one NIT berth.

His next and last post: head coach for Duke’s Blue Devils.

Since 1980, Mike has led the Blue Devils to five NCAA Championships and is generally considered to be one of the greatest college coaches of all time. In terms of NCAA titles, he is second only behind UCLA legend and WWII Navy Veteran John Wooden. Krzyzewski already leads the NCAA with the highest number of “March Madness” games won.

His incredible record also includes three Olympic Gold Medals as head coach of the U.S. Olympic basketball teams, and twice winning the FIBA World Cup. In 2011,  he was named Sports Illustrated "Sportsman of the Year" West Point awarded him the coveted Distinguished Graduate Award in 2005.

“Coach Krzyzewski’s success as a basketball coach and exemplar of the ideals of West Point has become renowned. Throughout the Nation, the nickname – "Coach K" – brings to mind an extraordinary man and the rock-solid values he embodies. Through his lifetime of achievements, he has done much to burnish the national image of West Point,” said West Point Association of Graduates Chairman and CEO Thomas B. Dyer.

When asked how he succeeded for more than 40 years in his career, he told the media, “I’ve loved what I do. I think if you work at what you love, it’s not work. I think about it every day, all the time. For me it’s fresh every year because I try to adapt what we do to the people that we have.”

A Military Vision for the Future

Duke’s associate head coach, Jon Scheyer, will take over when Krzyzewski retires and he has Krzyzewski’s full confidence.

“In the service, you are constantly looking at succession. Whenever you go to a unit you are taking over for somebody in command. That person helps you in continuity of excellence. Continuity of excellence has a lot to do with succession and how you handle succession. Looking at this, the implementation of the decision (to retire) has a lot to do with succession and a greater chance for continuity. If you do not have anybody who can take command, you’re in trouble. We do. That was one of the things I was concerned about. I don’t want everything to end when I stop coaching. I want it to continue. Succession is not done a lot, but in the military, it’s done all the time.” 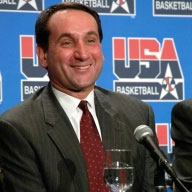 Krzyzewski is an active philanthropist, who helped raise more than $14 million toward the Emily Krzyzewski Center, a learning facility for less-fortunate children in Durham, NC named after his mother. “We felt it would be a great example for the kids, with the relationship that I had with my mother serving as the spirit of the center.” He and his wife are involved with children through Duke Children’s Hospital and the Children’s Miracle Network of 170 hospitals across North America.

“You know, to those who are given much, much is expected,” he says. “I’ve been fortunate to be given much and I understand that you should do something with that. It’s very humbling. Knowing you have the opportunity to do that, you better do it.”

In his retirement press conference, Krzyzewski said his family is his proudest achievement. He has three daughters and ten grandchildren.