Jonathan Woodson, MD, and the son of a WWII veteran, was born and raised with a deep sense of service. He has served his country in a variety of capacities including while deployed to three combat zones; today as an Army Reservist; as an active board member of the Wounded Warrior Project; and his advocacy for racial equality. He is outspoken that his fellow servicemen and women should have the same opportunities to serve our country, regardless of race.

And as an Army Reservist, he is currently the Deputy Commander 3rd Medical Command in Atlanta and holds the rank of brigadier general.

“An interesting part of my connection and willingness to serve had to do with my father and uncles, and the important issues that came up while they served in an segregated Army in World War II ,” he tells Veterans Advantage in an exclusive interview.

“It is, of course, day and night,” he adds, comparing how race is handled in today’s military. ”But some of the evolution of that is very telling for where we should always be going as a country and military service.” 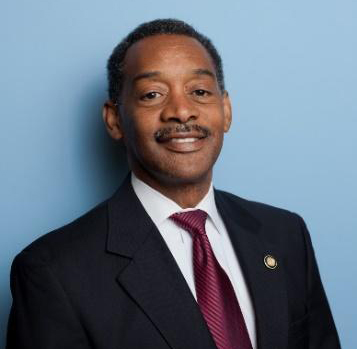 And like Powell, Dr. Woodson has also made great contributions at the Pentagon. From 2010-2016, he served as Assistant Secretary of Defense for Health Affairs, advising four Secretaries: Robert M. Gates, Leon Panetta, Chuck Hagel and Ash Carter. While there, he received the Department of Defense Distinguished Public Service Medal (the highest award given by DoD). Dr. Woodson also co-chaired or was a member of several Presidential Commissions and Delegations.

“As I reflect on my time in the Pentagon, and what is happening now, that is why I was committed to some of the reforms that were made, such as opening all military occupational specialties to women, and the end of “Don't Ask/Don’t Tell,” he says. "America cannot be great unless it uses all of the talents of all of its citizens."

In 2016, his unique perspective helped him become one of the Top 25 minority executives in health care by Modern Healthcare Magazine. In 2017, the George Washington Milken Institute and School of Public Health and BlackDocotrs.Org named him one of the top African Americans in healthcare, and Savoy Magazine named him to the list of Heroes in Medicine.

Reflecting today on his service, and his colleagues who served with him, Woodson points to the “selfless sense of service” and “servant leadership” qualities unique to the military mindset.

“It is a sense of mission. It is a sense of patriotism that is expressed through values of selfless service, honor, integrity and respect. It really is a fine class of individuals that you want to be associated with because when you get people who have served, they understand teamwork and complementary efforts and not quitting and getting the job done, even when it costs them something,” he said.

In addition to his current Reserve duty, Woodson saw combat environments in Kosovo, Saudi Arabia for Gulf War I in 1991 and Iraq for the 2003 war.  He also has commanded combat support hospitals, was a medical brigade commander and served as assistant surgeon general for force structure mobilization and reserve affairs in the Office of the Surgeon General.

Today, he serves on the Board of Directors of the Wounded Warrior Project, setting the organization on the path towards making veterans “whole” again.

“I think the Wounded Warrior Project is the only organization that comprehensively understands this issue of making the wounded warrior whole by looking at what their needs are, not only rehabilitation and medical issues but family issues and helping them reintegrate into society and pursue full lives based upon their individual goals,” he said.

Dr. Woodson is currently Director of Boston University’s Institute for Health System Innovation and Policy, which focuses on expanding health system research initiatives across Boston University, deepening connections between scholars, policy-makers, and corporations to address important national and global healthcare challenges, and advancing curricular activities at Questrom and across BU’s schools and colleges.

Before serving as Assistant Secretary of Defense, Dr. Woodson was Associate Dean for Students, Diversity and Multicultural Affairs and Professor of Surgery at BU School of Medicine. He received his BS in biomedical science from the City College of New York, his MD from New York University School of Medicine, and a Master’s in strategic studies from the US Army War College.