Former Army 1st Lieutenant Dick Murphy is the 33rd Mayor of the City of San Diego, the nation’s seventh largest city, and is regarded as bringing a fresh outsider’s thinking to the challenges of local politics.

His back-to-basics sincerity, which one local magazine described as "an endearing nerdiness," is the signature style of the mayor. As a leader, he seems to relish hearing all sides to an issue, much like he was as a high-ranking judge, which he was prior to becoming mayor.

"I want to hear from everyone," he said soon after taking office as mayor. "And I do try to be out in the public."

Most recently, he’s also been behind Veterans support services. His City Council on September 2 approved a major expansion of its veterans residential care facility, which is aimed at taking many of its estimated 2,000 homeless veterans off the streets.

"I’ve always believed that America has a special obligation to help military veterans when they need a helping hand, because they made the sacrifice for America when they were needed," Murphy said.

In addition, Mayor Murphy has established a Veteran’s Advisory Board that meets quarterly to discuss veteran’s issues. He also has dedicated a staff person, former U.S. Marine Rudy Fernandez, to act as a liaison both to the military and the veterans’ communities.

In addition, Murphy has championed a veteran’s memorial garden adjacent to the Veteran’s Memorial Center in Balboa Park, and he has obtained a $1 million grant from the state to build it.

Other noteworthy public service accomplishments include establishing the city’s first ethics commission, supporting environmental and public safety initiatives, and jumpstarting a program to build a new local downtown ballpark in 2004.

As an Army officer in the 1960s, Murphy was assigned to the Pentagon, and also the Johnson and Nixon administrations as a military aide. There, he grew to appreciate the virtues of public service.

"I was a low-level person. But I interacted with Supreme Court justices, and the leaders of Congress, the Cabinet members. I met the heads of states of other countries. And, I really realized that those were pretty normal people that just had been interested in pursuing doing something like that. And had been successful," he said in an interview with San Diego public television during his mayoral campaign.

"These were people that to some extent were pursuing the public good. And, if they could do it, I could do it too," he added.

Murphy also served as the San Diego Marketing Director for Bank of America, and as an attorney. In 1985, he was appointed Municipal Court Judge by Governor George Deukmejian. In 1989, the Governor elevated him to Superior Court Judge where he presided over criminal and civil trials. There he grew "tired of career politicians and I thought that someone who came from the outside ought to be in there to provide for the independents." 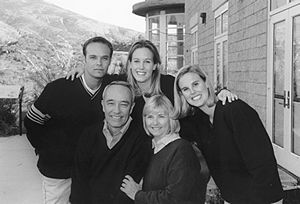 He graduated Phi Beta Kappa with a degree in Economics from the University of Illinois, received his Master of Business Administration from Harvard University, and his law degree from Stanford University.

He and his wife, Jan, have lived in San Diego for more than 30 years and have raised three children.

Editor’s Note: Veterans Advantage is grateful to Mayor Murphy’s San Diego Fire and Rescue Department, our West Coast partner in our Recycle and Reward program for thanking our troops through proceeds from recycled cellular phones. We also recognize the large number of Active Duty, Retired military, Veterans, and their family members from San Diego, and honor them for their service to our nation.