Twenty years ago, "Jobs for Vets" was one of the rallying cries of advocates who cared about those who had returned to a less than rousing "welcome home" after serving in Southeast Asia.

Forced to acknowledge that too many Vietnam veterans had been "left behind" their cohort, agencies of government on the state and national level geared up to offer aid and comfort.

Laws were enacted and programs were funded to train and place un- and under-employed veterans in career-path jobs.

While some of these efforts, which are now well into their third decade, have worked out well, others have done little more than ensconce themselves in the roster of programs nourished by tax dollars.

Yet as many employed Vietnam veterans are reaching the age of retirement, the rallying cry has changed: ‘Level the Playing Field,’ advocates say, so that veterans - and service-connected disabled veterans in particular - can compete for government contracts for all manner of goods and services. One of the most prominent advocates is the Task Force on Veterans Entrepreneurship, chaired by Rick Weidman, director of government relations for Vietnam Veterans of America; one of the most promising is The Veterans Corporation, now headed by retired General Charles Henry. They are being heard, finally, at the highest levels of government. And government, too, while rarely leading the charge, has managed to get into the act: the Small Business Administration, which runs a variety of programs targeted to such constituent groups as women and Native Americans, also dedicates an office to assist veteran small-business owners.

The SBA, of course, is only complying with the law - in the past several years, Congress has enacted Public Law 105-135 of 1997, a section of which provides for comprehensive outreach to veteran entrepreneurs, and P.L.106-50, the Veterans Entrepreneurship and Small Business Development Act of 1999 which, among its provisions, established and funded The Veterans Corporation and set "goals" for awarding government contracts to veteran-owned small businesses.

Without leadership at the top, however, any law can be hollow. Prodded by advocates after years of bureaucratic inertia, SBA Administrator Hector Barreto determined to make the system more responsive to this underserved constituency. One of his key moves was to keep the then recently hired Bill Elmore as Associate Administrator for Veterans Business Development.

Elmore, a longtime entrepreneurial activist from St. Louis, had developed a successful model for a small-business training program in the late 1980s. Elmore has brought ideas and enthusiasm and an abiding faith in the "enormous strength and value of small businesses owned by veterans" to an agency steeped in bureaucratic indifference. "We’ve refocused and redesigned the Veteran Business Outreach Centers we inherited to play on the strengths of the veterans we assist," he said. "Because everyone is different: they have different skill sets and degrees of experience," which means that the services they need vary. Some need only a level playing field to compete for government contracts to grow their business; others need more "remedial" help.

One tool Elmore has embraced to meet the mandate of the outreach mission is the Internet. "It’s impossible to service the entire country from three regional centers" in Florida, Texas, and New York, he explained during a telephone interview from his office in Washington. The Web, however, can disseminate information with efficiency and clarity (visit www.sba.gov/vets/index.html).

He also engaged the artist Richard Rezac to design a poster heralding the mission of the office.

"We’ve managed to send this poster to more than 6,500 locations at which veterans are served," Elmore said. These include the Vet Centers, city and state offices of veterans’ affairs, municipal buildings, service centers operated by the American Legion and other VSOs. The hope is, Elmore said, that the poster will be hung in a prominent location at these venues and that it will attract veterans who come in seeking help for their entrepreneurial efforts. 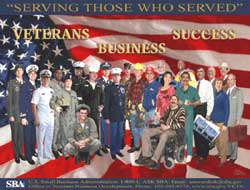 Elmore, however, wants to do a lot more. He’s adapted the model he helped create to the realities of the 21st century and to the culture of the SBA. The model coalesces and mobilizes private as well as public resources to provide a range of services to veteran business owners. These include everything from developing a business plan and conceptualizing a marketing initiative to attracting behind-the-scenes door-openers and successful private-sector veteran business owners to share their experiences.

How effective is all this?

While acknowledging that "it’s hard to measure outcomes," Elmore believes the effort is making inroads. He noted that "after a decade of decline in the number of veterans being served, we’ve begun to reverse these numbers. The number of loans to veterans increased in 2002; already in 2003 they’re up more than 30%. In the year 2000, there were 11,000 visits each month to the SBA’s Web page for veterans; since December 8, 2002, we’ve averaged 236,000 hits a month. We think we’re getting our message across: that we’re here to help veterans become successful in their endeavors."

The "most visible" aspect of the SBA’s efforts, perhaps, has focused on serving members of the Reserves and National Guard who together account for 48 percent of the military’s manpower.

"After the first Gulf War, we saw significant damage to the businesses of the self-employed who were called up to active service," Elmore said. "To assist these men and women while they’re on active duty, we help them get payment on loans deferred, and at a lower interest rate. We work with ESGR - the Committee for Employer Support of the Guard and Reserve - to ensure that a fact sheet about the services we offer is part of their demobilization package. We want them to know about the opportunities available to them, which include modest grants for research and development of items utilized by federal agencies. We can help them get access to credit; in fact, we help them get economic disaster loans, which now average $84,000 at 2.9 percent interest."

Elmore’s office works with the SBA’s Office of Government Contracting and Business Development to provide guidance to small-business owners eager to bid on federal contracts - and to help government agencies meet the "goal" that 3 percent of all contracts go to small businesses owned by service-disabled veterans. And, conversely, through "matchmaking events" and the development of databases, they help government agencies find veteran-owned businesses that might be able to fill their needs.

And veteran business owners are "just starting to organize," he said, citing the Northeast Veteran-Owned Business Network." In organization, as has often been said, there is power.

Part of the problem, Elmore acknowledges, is that there’s no central roster of veteran-owned businesses, and there hasn’t been enough attention to identify businesses owned by veterans and especially by service-connected disabled veterans. Yes, there are something like four million veteran-owned small businesses, of which perhaps 200,000 are owned by disabled vets, but these are guesstimates. So he’s pushed his agency’s data collection operation to get some verifiable numbers on how many Reservists and Guardsmen do in fact own and operate their own businesses; how many service-disabled small-business owners need assistance; what types of businesses are owned.

"In two years," Elmore said, "we’ll have the best data we’ve ever had."

For Elmore, an Air Force veteran who spent "two years, eleven months, and three days in the service from 1969 to 1972" and who had labored in the hustings of the Midwest for so long, "It’s an honor and a privilege to tackle this job and help fellow veterans get access to the resources they need and deserve. After years of frustration over the lack of attention paid to veterans who own their own businesses, we can help take the lead and help sensitize the bureaucracy to the needs of and contributions made by veterans.

His agenda, while ambitious, is not without frustrations: "To move into a bureaucratic system and learn the intricacies of how to do regulations" is a challenge, he said. And after years on the outside, "It’s a learning curve on how to be effective from inside the bureaucracy."

Elmore’s advice to vet entrepreneurs is simple and straightforward: "We can help you. To access our assistance, go to your SBA district office - you can find it listed in the blue pages of your local telephone directory - and speak to the veterans business development officer. We can help you help your business."

With the continuing aid of an advisory committee composed of successful entrepreneurs and advocates whose mission is to help determine "what approaches make the most sense," this is a promise that both budding and experienced business owners ought to seriously consider.