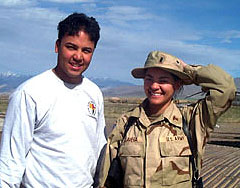 Just over a month after 1Lt. Valencia Delavega got engaged last August, she received orders to Afghanistan.

"At first, I didn’t want to deploy, but then I realized this was what I had joined the Army to do," she said. "This was why I went to West Point."

Delavega’s grandfather had served as a warrant officer in Korea and Guam. She grew up listening to stories about the military. When it came time for college, she recalled the excitement she’d felt hearing his tales, so she applied to West Point.

"I wanted something more challenging than just going to college," she said. "I wanted to do something different and I wanted to make a difference. I thought West Point was the perfect route for that."

As it turned out, she said, the physical and military training was fairly easy for her, but the academics were "really tough." She made it through, went on to jump school, jumpmaster training and an assignment at Fort Bragg, North Carolina. There she met 1Lt. Gregorios Zayas of the 3rd Special Forces Group.

It was not love at first sight.

"He walked into our company area and another lieutenant introduced us," she recalled. The lieutenant said, ‘This is Valencia,’ and Greg said, ‘I’m Lt. Zayas.’ He wouldn’t use his first name. He was so rude! Then, like three weeks later, he wants to go out on a date."

"I was a jerk at first," said Zayas, who is now a captain. "She was the talk of the town and I didn’t want to come across as anything other than professional."

Zayas, as he puts it, was "born into the military" at Fort Lewis, Washington. His dad is a retired enlisted man. Zayas joined the Army and qualified to be a member of the Special Forces. He said his unit spends a lot of time in Africa doing humanitarian and other missions.

"When you’re out in Africa in 125-degree weather with no cold water and no cold drinks and you just have an MRE to eat, you re-evaluate your priorities and your beliefs," Zayas said. "It’s matured me. I was a spoiled brat who got everything he wanted. I used to take a lot of things for granted -- a microwave to heat up some food, or cold water. I don’t take anything for granted anymore."

The seven-year veteran plans on making the Army a career. "My goal is to do at least 20 years. I love the military. I love the guys." And, as fate would have it, he fell in love with another soldier.

As the weeks went by after their first meeting, the West Point grad and the Green Beret found they had a lot in common. Both are airborne. Both are jump masters responsible for making sure other paratroopers are safely out of the aircraft before they go out last.

"The coolest thing is looking at her on the other side of the airplane and we’re doing the same job at the same time together," Zayas said. "There aren’t very many people in the military that can say they do that."

Shortly after the couple got engaged, the world changed. Terrorists attacked the United States and the military was sent into action. Zayas stayed behind at Fort Bragg while Delavega went to war.

"There are people who have been in the military for 10 or 15 years that have never had the opportunity to deploy, to go fight for freedom," she said. People in her unit were really motivated about the deployment,

"We were fired up. Everyone wanted to show the world that nobody could do that to the United States without expecting some kind of repercussions. I think we’ve proven that. We’ve come out here and we’ve shown the world what we can do. We’ve warned them not to mess with us and that we want to prevent things like this from happening in the future."

Zayas arrived in Afghanistan three months after Delavega. "I was happy to get orders," he said. "I hadn’t seen my fiancée in months. I couldn’t get here fast enough."

He said soldiers in his Special Forces unit welcomed the chance to fight. "That’s what they train all their lives for," he said. "We have guys who have been in the Special Forces for 15 years and they’ve never seen combat. This mission means a lot. The terrorists took our pride away for a brief second.

"The guys are so motivated," Zayas said. "They have flags up everywhere and the Twin Towers are drawn on the walls. That means a lot. They’re really energetic, pumped up, ready to go and fight because one, that’s what they do, and two, no one is going to pick on us and get away with it. They have that kind of mentality."

Zayas and his counterparts conduct resupply missions for combat troops downrange. They sling-load food, water, fuel, and ammunition from helicopters.

Delavega admitted she worries when Zayas is out on a mission, "but that’s our job. If you worry about it, you’ll never be able to live. You’ve just got to take it for what it is and say this is what we signed up to do. If we didn’t want to do it, we should never have signed up to do it."

Delavega and Zayas know how fortunate they are to be in the same place at the same time. "We’re very blessed," Delavega said. "We get to see each other every day. We do breakfast. We do dinner and we get to watch a movie every night."

Delavega and Zayas have already postponed their wedding date twice due to circumstances beyond their control. At the moment, they’re slated to wed on the last day of the year in Santa Fe. If that happens, she said, "we’re going to have one hell of a New Year’s Eve party."

Military & Veterans Life Scott’s View: First Day of Fall 2020 & Preparing for the Future Can you believe the first day of fall has arrived? With hopes for a coronavirus vaccine emerging and a presidential election on the horizon, our nation is entering a period of uncertainty like nothing before in recent memory. No matter what the future holds, we’re committed to creating new offers for your lifestyle and everyday needs. Shop Veterans Advantage first by checking out our Military Discounts Marketplace daily.
Military & Veterans Life VetFamily: John Mayer “I am about the same age as the first wave of Iraq and Afghanistan military veterans,” said popular singer John Mayer, speaking about today’s post-9/11 veterans. “I have felt gratitude and discomfort about the disproportionately large burden that military service members carry in our society, and I have spent a lot of time trying to figure out the best way to ‘support the troops’ with real action instead of platitudes.”
Military & Veterans News Proclamation on National POW/MIA Recognition Day, 2020 Throughout our Nation’s history, America’s sons and daughters have heroically safeguarded our precious freedoms and defended the cause of liberty both at home and abroad.  On National POW/MIA Recog
Military & Veterans News VA offers debt relief to Veterans impacted by natural disasters WASHINGTON — The U.S. Department of Veterans Affairs (VA) announced today its commitment to extend debt relief to Veterans adversely impacted by natural disasters.