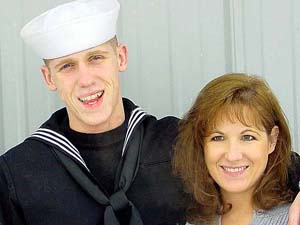 Not that Parenti was anywhere near the World Trade Center or the Pentagon. He was safe at home in the Ohio farmlands. But in less than a month, he would enter boot camp.

He’d enlisted in the Navy after finishing high school and had qualified to become a nuclear propulsion plant operator for submarines and aircraft carriers.

Sonya Schilling and her son, Seaman Joseph Parenti, pose for family photos during a light January snowfall in their hometown of Mount Sterling, Ohio. Parenti was on a training break and headed off to the Navy Nuclear Power Technology Command in Charleston, S.C., where he hopes to become a nuclear propulsion plant operator. Photo by Susan McKay.
Anchors away for Joe Parenti

Schilling said she was "ecstatic" about her son’s enlistment. "I knew it was absolutely the right thing for him," she said. "At this point, there was no war in sight. We were happy-go-lucky, peaceful Americans, going about our merry lives."

After September 11, however, sending her son off to the uniformed ranks took on new meaning.

"I’m very grateful he’s in the Navy and not in the other branches in terms of how he’s going to be protected," she admitted. "If he were in the Marines or the Army, I would be very scared."

Schilling had raised Parenti as a single mother since he was eight months old. After working in Washington, D.C., and in Lubbock, Texas, she returned to her home state of Ohio, where she now works as the director for government sales and procurement at a local company.

"Joseph was a bright kid who got bored in local schools," she explained. "He felt he was in a very unchallenging academic environment, and he just didn’t put forth the effort to get the grades he needed. He’d left himself with few options."

She thought his decision to join the military was a godsend because of the discipline the military instills and the education opportunities it provides. After completing nine weeks of basic training, she said, her son was "just a different kid."

"He came home from boot camp in January, and we sat down and talked," Schilling said. "He told me, ’Mom, you have no idea. I can’t even begin to imagine being in college at this point.’ He was smart enough to know he did not have the self-discipline to do what he needed to do to make the grades on his own. I’m now seeing a new level of maturity coming through.

"He couldn’t understand why anyone would want to shell out that kind of money for their education when they could get it for free, and have that sense of camaraderie and teamwork that he came out of boot camp with."

Parenti, an E-3 firefighter, is now at the Navy Nuclear Power Training Command near Charleston, South Carolina, training as an electrician’s mate for 26 weeks. Then he will do another 26 weeks of nuclear power school.

Schilling said the Navy schooling offers more structure than students get in college. "They have mandatory study hours. If you drop below a certain (grade-point average), the number of hours goes up. I know he studies a lot on Saturdays and Sundays as well."

Though her son’s safely tucked away on American soil - at least for the time being, Schilling said, she watches the war news closely. For her, and for other parents with offspring in uniform, she said, the war on terror has hit home.

"Right after September 11, it was all you thought about," she said. "Now, it’s part of our day-to-day thought process. As Americans, we would live for years and years and years in this insulated, protected world where nothing was going to touch us. We are the United States, after all. September 11 dramatically changed our perception of how vulnerable we really are."

Ohio may be far from East and West Coast population centers, she said, but local residents are concerned about terrorist attacks.

"We think about the ability to affect our water supplies -- how unprotected they are. We didn’t think about it before."

Despite the terrorist threat, Schilling said, she is glad her son joined the military.

"I’m so proud of the man he’s turning into. I am proud that he’s making the most of what the Navy offers, and I’m proud that he wants to serve his country."

Military & Veterans Life Scott’s View: First Day of Fall 2020 & Preparing for the Future Can you believe the first day of fall has arrived? With hopes for a coronavirus vaccine emerging and a presidential election on the horizon, our nation is entering a period of uncertainty like nothing before in recent memory. No matter what the future holds, we’re committed to creating new offers for your lifestyle and everyday needs. Shop Veterans Advantage first by checking out our Military Discounts Marketplace daily.
Military & Veterans Life VetFamily: John Mayer “I am about the same age as the first wave of Iraq and Afghanistan military veterans,” said popular singer John Mayer, speaking about today’s post-9/11 veterans. “I have felt gratitude and discomfort about the disproportionately large burden that military service members carry in our society, and I have spent a lot of time trying to figure out the best way to ‘support the troops’ with real action instead of platitudes.”
Military & Veterans News Proclamation on National POW/MIA Recognition Day, 2020 Throughout our Nation’s history, America’s sons and daughters have heroically safeguarded our precious freedoms and defended the cause of liberty both at home and abroad.  On National POW/MIA Recog
Military & Veterans News VA offers debt relief to Veterans impacted by natural disasters WASHINGTON — The U.S. Department of Veterans Affairs (VA) announced today its commitment to extend debt relief to Veterans adversely impacted by natural disasters.