The Memorial Day weekend is the unofficial start of summer and a major driving vacation holiday. More importantly, though, as every veteran will tell you, the last Monday of May each year commemorates the men and women who died while in military service.

In observance of the day, many people will visit cemeteries and memorials, and place American flags on gravesites at national cemeteries. Others will meditate silently or pray for the fallen at 3pm on Monday, May 27.

In December 2000, the U.S. Congress passed -- and President Clinton signed into law  --  “The National Moment of Remembrance Act.”

“Each Memorial Day, the Nation honors those Americans who died while defending our Nation and its values. While these heroes should be honored every day for their profound contribution to securing our Nation's freedom, they and their families should be especially honored on Memorial Day. The observance of a National Moment of Remembrance is a simple and unifying way to commemorate our history and honor the struggle to protect our freedoms,” President Clinton said when signing the bill into law.

The National Moment of Remembrance encourages all Americans to pause wherever they are at 3 p.m. local time on Memorial Day for a minute of silence to remember and honor those who have died in service to the nation.

Memorial day dates back to the post-Civil War period when, on May 5, 1868, the head of an organization of Union veterans — the Grand Army of the Republic (GAR) — established a national Decoration Day as a time for the nation to decorate the graves of the war dead with flowers. Maj. Gen. John A. Logan declared that Decoration Day should be observed nationally on May 30. It is believed that date was chosen because flowers would be in bloom all over the country.

Casualty counts are often challenging for historians, but according to the Oxford Companion to American Military History, these are the deaths from our wars:

Vietnam Veterans Honor the Fallen – And Mayor/Sgt Edward I. Koch

Vietnam Veterans Remembrance Day occurs each year at the end of March, marking the anniversary of the 1973 withdrawal of U.S. combat forces under the terms of the Treaty of Paris.

“Ed Koch knew Vietnam Veterans had been given a raw deal. So he did what Ed Koch did best – he stepped up, he exercised leadership and took action to recognize the service and sacrifice of Vietnam Veterans,” Higgins told the gathering.

In 1980, Mayor Koch established a commission for the creation of New York City’s official Vietnam Veterans memorial, and appointed Higgins to co-chair it. Both agreed to serve as volunteers.  Without public funds, the Commission’s activities were exclusively financed by $5 million raised by patriotic individuals and corporations. Through a five-year effort led by Higgins, Mayor Koch dedicated the Memorial in lower Manhattan, a stunning glass wall etched with service members’ letters to their families, on the evening of the tenth anniversary of the end of the Vietnam War, in May 1985. The next day, a “Welcome Home” parade, the nation’s first, turned out to be the city’s largest ticket-tape parade in it’s history. It included the participation of 25,000 Vietnam Veterans from around the nation. 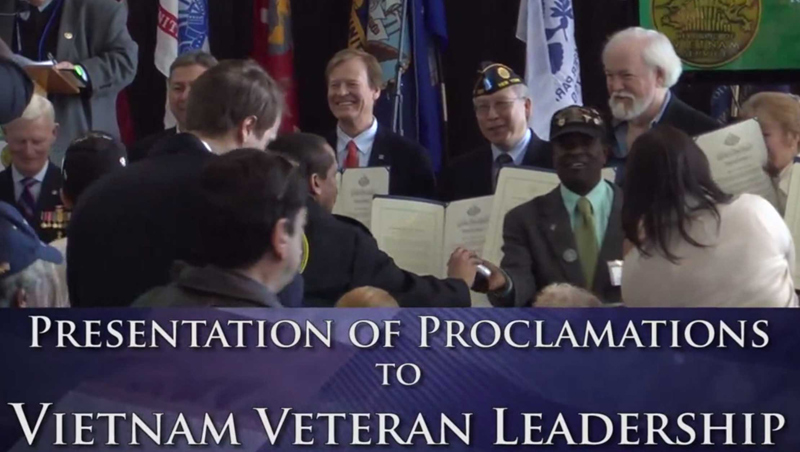 “Koch, a Veteran who had served his country, knew how important it was to be welcomed home properly. And respected for your service,” Higgins said.

Earlier this year, city and national leaders attended a memorial service for Koch, all of whom praised Koch’s leadership in overcoming the city’s economic adversity, but they did not include recognition of his military service.

“No one who eulogized Ed that day mentioned that he had served his country in the military with distinction and that he was a champion for Vietnam Veterans – that he was deeply committed to recognizing their service and sacrifice,” Higgins said.

New York City Vietnam Veterans Recognition Day is organized each year by the United War Veterans Council, an organization chartered by the City of New York. UWVC hosts the event with the memorial as a backdrop, and with a Mayoral proclamation awarded to Higgins and Veterans Advantage, together with leaders in the Veteran Community.

In a highly emotionally ceremony, the names of the 1741 New Yorkers who gave their lives in Vietnam were read at the ceremony.