WASHINGTON – Some of our Nation's best-known celebrities are off to visit the troops this holiday season, bringing good cheer, laughs, and a taste of home when they need it most.

The United Service Organizations (USO) announced its "Hope and Freedom Tour 2005" throughout the Gulf region. During the tour, the celebrities will perform shows; visit with troops, sign autographs and tour military facilities at a number of locations in the region.

Joining the tour will be Sergeant Major of the Army Kenneth O. Preston. He serves as the Army Chief of Staff's personal advisor on all enlisted-related matters, particularly in areas affecting soldier training and quality of life. Last year, Preston and a group of celebrities traveled to Kuwait, Iraq and Afghanistan to visit service members during the holidays.

This tour continues the USO tradition of bringing entertainment to troops serving far from home, especially during the holidays. Several celebrities and bands have made trips for the USO so far this year, including Toby Keith, Charles Barkley, Jessica Simpson, Nick Lachey, Drowning Pool, Gary Sinise, Rascal Flatts and Adema.

Wrestlers in Afghanistan
This announcement comes on the heels of another great set of entertainers traveling overseas to support the troops. 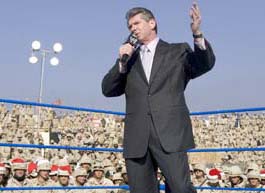 World Wrestling Entertainment Superstars and Chairman Vince McMahon took Monday Night RAW to U.S. troops stationed in Afghanistan this past week (December 7 – 9). Hosted by Armed Forces Entertainment, the tour marks the third holiday "Tribute to the Troops" WWE has produced since 2003. The tour and a live-to-tape performance of RAW in Afghanistan will be presented as a WWE RAW holiday special to air on USA Network on December 19 at 9 p.m. (ET/PT).

"It is important to us that we reach as many of the troops as we can, not only to entertain them, but thank them for their service to our country," said WWE Chairman Vince McMahon. "Going back on tour with Armed Forces Entertainment means we have another opportunity to tell the stories of the significant sacrifices our men and women in uniform are making for our freedom and the freedom of others. In particular, we are excited to be visiting and performing for the first time for our 'forgotten heroes' in Afghanistan who continue to risk their lives in the effort to establish a strong, free Afghanistan."

Military & Veterans Life Cover Story: History of Arlington National Cemetery Perfectly aligned white marble tombstones dot green hills like pearls, strung together by memories of fallen military members. That’s the sight at Arlington National Cemetery near Washington, DC, which is the resting place for more than 400,000 veterans and their dependents over approximately 640 acres on the Potomac River. This Memorial Day we remember the fallen soldiers buried at Arlington and across the nation. And this Saturday Arlington hosts the inaugural Flowers of Remembrance Day, where the public can bring flowers to the Tomb of the Unknown Soldier to pay tribute to the sacrifice of so many veterans.
Military & Veterans Life Scott's View: Memorial Day is a Time for Remembrance For most Americans, Memorial Day is the unofficial kickoff of summer travel and fun, coupled with a major shopping holiday. For Veterans Advantage members like you, however, it means so much more.
Military & Veterans Life Scott’s View: Armed Forces Day and Military Appreciation Month Tomorrow is Armed Forces Day, a day to honor those serving in all our Military branches; Air Force, Army, Coast Guard, Marines, Navy, Space Force.
Military & Veterans Life Scott’s View: Justin Constantine: A Great Marine and Legacy When I first learned of Justin Constantine's death, I was shocked and saddened. So many of our fallen men and women who served our nation deserve a long and satisfying life that many fellow veterans are fortunate to have today.