Editor’s Note: General Bell is the former Commanding General 220th Military Police Brigade (Army Reserve), USMA Graduate Class 1957, Graduate of Army and National War Colleges and the author of more than 300 military, domestic and foreign publications.  In this Cover Story, he provides us with his personal perspective on the chaotic end of the Vietnam War with comparisons to the end of the war in Afghanistan.

I had come from a Vietnam battlefield in February 1969 as an armored cavalry squadron executive officer to join the Joint Staff’s planning section, J3.  After six months I had just left behind a thousand man squadron where my major accomplishment was that on my watch the unit had suffered no combat or other deaths. 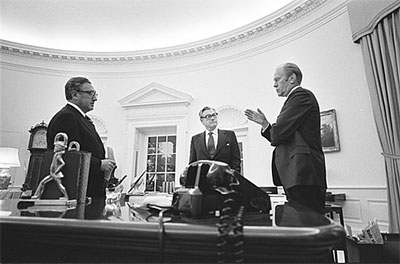 President Gerald R. Ford Speaking with Henry Kissinger and Vice President Nelson Rockefeller in the Oval Office Prior to a National Security Council Meeting to Discuss the end of the Vietnam War

Besides having required professional military qualifications I was also a competent typist.  For the planning section and me that became a good thing because, in a ten percent staff force reduction, the section had just lost all its enlisted soldier typists.  For me their loss was my gain as it placed me in direct contact with a select group of two officers drawing up plans for President Richard Nixon’s withdrawal from South Vietnam.

When those two officers left the country in the spring, I became the institutional memory for the withdrawal planning action.  They were succeeded by Colonel Donn A. Starry, who reported directly to the commanding general of the Military Assistance Command Vietnam, General Creighton Abrams.  I, still in the group, had previously served with the colonel which allowed necessary harmonious continuity in planning.  While I worked with Starry on one plan, Abrams came up with an innovative plan of his own to turn the war over to the South Vietnamese and get the Americans out of the country.  The Abrams plan anticipated a smooth transition with a positive end state.  Although his plan was rejected in Washington, we were on the road to an orderly withdrawal, but the end result was not the one wanted or anticipated.

On 29 April of that year the United States was frantically airlifting Americans and Vietnamese civilians out of the country.  The next day, two American soldiers died in a North Vietnamese rocket attack -- our last Vietnam war casualties -- as North Vietnamese forces closed in on Saigon, the South Vietnamese capital.

If there is ever an example of a chaotic situation, the one around Saigon at that time is hard to beat.  Further description of the momentous tragic time is not needed. All the years of detailed planning, part of which I was heavily involved in, had long since become irrelevant.  But interestingly, over the years friendly, even productive, relations have emerged between the present Vietnamese and United States governments.

Today there are many in the world and the United States who condemn the United States for what they call “chaos” in our withdrawal from Afghanistan and liken the situation to the last American days in Vietnam.  I disagree.  The last American administration gave Afghanistan to the Taliban two years ago when it negotiated a withdrawal evidently without the former Afghan government’s input.  When the present administration took office, it was presented with 17,000 Special Interest Visas from Afghans to the United States to be processed.  The seeds of potential chaos thereby obtained.

But that is in the past.  As of today, over 120,000 individuals from Afghanistan and other countries have been successfully evacuated by air to countries around the world.  In the process, however, there is a sharp contrast in Kabul from that in Saigon.  True there were outbreaks of tragic panic to include the horrendous suicide bombing at the start.

But.  Any further terrorist suicide murder attempts were squashed.  No helicopters were shot down.  No refugee laden aircraft were blown out of the sky by on-board terrorists.  The enclosed airport was not penetrated by suicide bombers.  If Taliban fighters were adversaries they still tacitly cooperated with processing persons trying to gain access to departing aircraft.  While thirteen American service personnel sadly gave their all in the process, they and thousands of others nobly did their duty.

If there was true chaos around Kabul in the last two weeks of August, the United States and allies would not have been able to accomplish what they did.  The air evacuation was a tremendous success, even as we lament the need for having to execute it.  To try to assess blame for the failure to win a twenty year war is today at best unnecessary and at worst counterproductive.  For the United States and its allies, the war is over, even if for the new Afghan government and its population the way is less clear.

But from my perspective, in light of my intimate Vietnam experience and what the United States and its allies accomplished in Afghanistan, we have no reason not to be proud of a gigantic evacuation effort that only the United States in the world has the capability to match in executing.   The scramble from Vietnam was clearly chaotic.  My perspective, however, is that it is not justifiable in sum to call the withdrawal process and the way it was possible to secure thousands of Afghan people a new beginning in life, chaotic --- even as it well could have been.

Veterans Advantage Awards VetFamily: Jessica Alba Actress Jessica Alba hails from a military family - both her father and grandfather served our country. Among her other accomplishments on and off the screen, the movie star, philanthropist, and entrepreneur became one of six newly announced members of the board of directors at Yahoo this month.
Discounts & Benefits Scott's View: Book An Exclusive Vacation Package This Summer with Veterans Advantage This week, we’re focusing on recognizing dad for Father’s Day with special gifts, as well as other exclusive summer savings with VetRewards. First and foremost, enjoy the day with dad!
Military & Veterans Life Cover Story: History of Flag Day “Since adoption of the Stars and Stripes, Americans — and people around the world — have continuously looked to our flag as a symbol of unity and liberty,” wrote President Biden last year on Flag Day. Like every year since 1916, the United States will celebrate the nation’s flag on June 14. Though Flag Day is not a federal holiday, it’s a day of observance and patriotism and coincides with the Army’s birthday.
Military & Veterans Life Scott’s View: Remember the U.S. Army Birthday Next Week We hope you enjoy today’s cover story on the history of Flag Day, which is next Tuesday, June 14. Similar to other nations that designate a day to celebrate their flag, ours in the United States reflects our unique history. And it’s an exciting one!