Despite a major drawdown of deployed troops in recent years, 2015 remained a busy time for the U.S. military, which continued to make headlines in a year of historic milestones. Here are just a few of the notable military news stories that Veterans Advantage shared in 2015:

The Fight Against ISIL

Operation Inherent Resolved marked its one-year anniversary while continuing the fight against ISIL in Iraq and Syria. First launched in August 2014 with U.S.-led airstrikes, the campaign continued its success in 2015 by destroying enemy facilities, vehicles and equipment. This enabled Iraqi Security Forces and anti-ISIL fighters in Syria to make significant advances against the enemy. Early in the year, Gen. Lloyd Austin, of U.S. Central Command, told the House Armed Services Committee that more than 8,500 ISIL fighters had been killed in the air campaign and that as a result, “ISIS has assumed a defensive crouch.”

Major targets, including top ISIL leaders and lead executioner Mohammed Emwazi, or “Jihadi John,” were eliminated in the more than 9,000 coalition airstrikes that have taken place to date – more than 7,000 of which have been conducted by the U.S. Part of this work was done by the long-awaited Lockheed Martin F-22 Raptor, which made its combat debut striking ISIL targets in northern Syria. The Raptor had initially been grounded due to problems with its oxygen systems, but the Air Force finally lifted all flight restrictions and the costly stealth tactical fighter aircraft – costing a whopping $412 million each – roared into action in September.

In October, it was reported that the U.S. would deploy ground troops to northern Syria to advise and assist rebel forces fighting ISIL. While their number would be capped below 50 and they would “not have a combat mission,” according to Josh Earnest, the White House Press Secretary, this move marked a significant escalation of Operation Inherent Resolve. Sadly, this announcement came following the first combat-related death of a U.S. service member in the fight against ISIL: Master Sgt. Joshua Wheeler, a Delta Force commando who died during an operation that freed 70 ISIL-held hostages in northeastern Iraq. 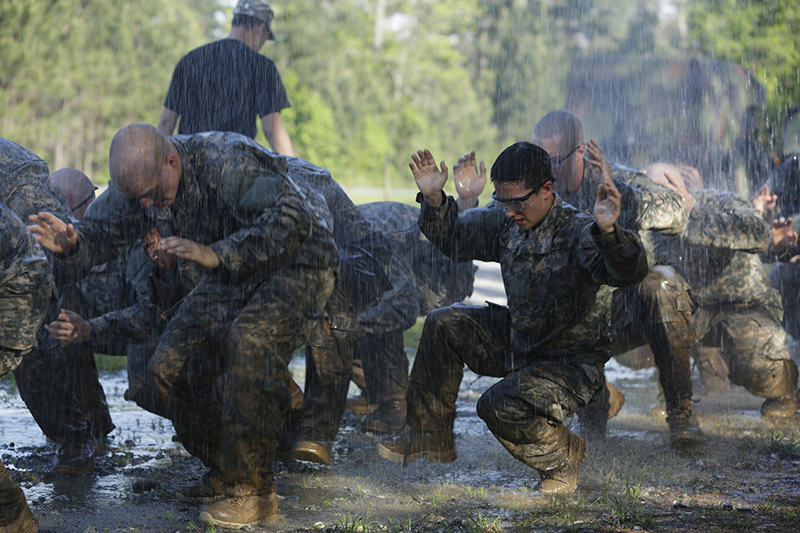 In December, Defense Secretary Ash Carter made history by announcing that all military occupations and positions would be open to women, without exception, starting in January 2016. This opens the door to combat-related positions that, until now, were off limits to females – 220,000 jobs in all – including infantry, armor, reconnaissance and some special operations units, including the Navy SEALs, Air Force para-rescue and the Army Rangers.

The decision came after three years of research by leaders of each branch of service who studied whether integration of women into these positions was possible. Their surveys, data and recommendations were then passed along to the Secretary of Defense, who ultimately made the call.

Carter’s decision may have been influenced by another historic milestone met earlier in 2015, when two female officers became the first women to graduate from the U.S. Army Ranger School at Fort Benning, Georgia. Capt. Kristen Griest, a 26-year-old military police officer from Connecticut, and 1st Lt. Shaye Haver, a 26-year-old AH-64 Apache helicopter pilot from Arizona, completed the grueling 62-day infantry leadership course that was only been open to males since its founding in 1952. A third female graduate, Maj. Lisa Jaster, 37, a combat engineer with the U.S. Army Reserve and a mother of two children, soon followed Griest and Haver's historic graduation.

Soon thereafter, the Army announced that the Ranger School would be opened to all qualified soldiers, regardless of gender. 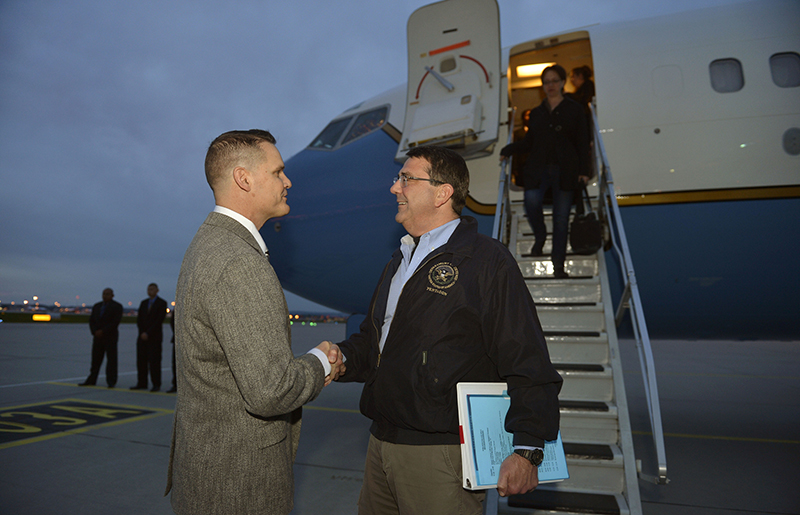 On February 17, Ash Carter took the oath of office and replaced Chuck Hagel as the 25th Secretary of Defense. Vice President Joe Biden, who called Carter a “a genuine expert on the acquisition and technical capabilities that are going to help guarantee the U.S. military is second to none in the world,” administered the oath.

After being sworn in, Carter laid out three commitments he will uphold in his new role. First, to help the president make the best decisions about the country and the world’s security and execute those decisions effectively; second, to protect the men and women he will lead and reflect their commitment and dedication to service; and third, to build a force for the future that would include embracing change – a commitment that might have influenced his historic decision to open combat roles to women. 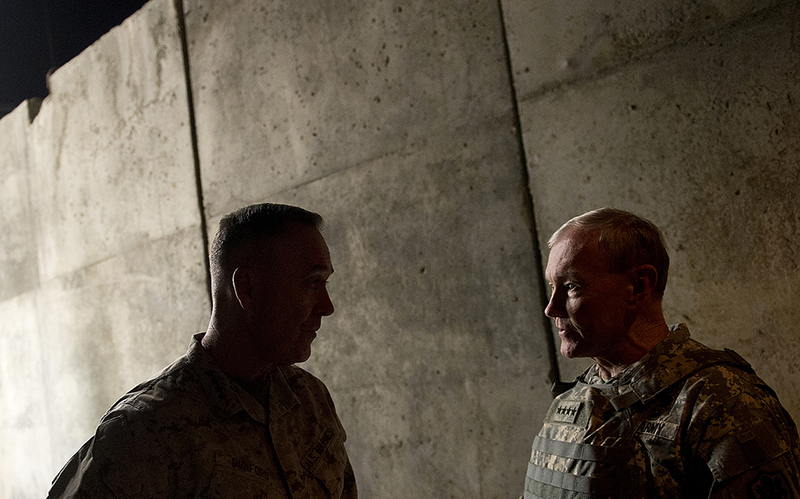 Another change of command took place in the Joint Chiefs of Staff when Marine Gen. Joseph Dunford replaced Army Gen. Martin Dempsey as chairman, the principal military advisor to the president and his national security team. Prior to the chair transition ceremony that took place in September, Dunford was the commandant of the Marine Corps, a position he held since 2014.

In a statement issued by Gen. Dempsey, he called his replacement “a phenomenal, combat-tested leader and a man of integrity, courage and humility” who will advise the president as the U.S. continues to train Afghan forces fighting Al Qaeda, support the fight against ISIL in Iraq and Syria, train with its allies in Europe and combat growing threats of cyber attacks. 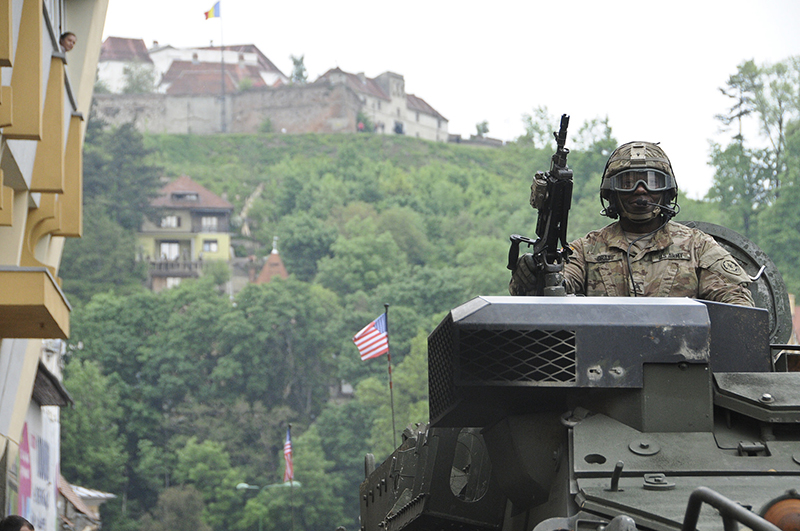 Following its condemned actions in Ukraine in 2014, Russia continued to flex its muscle and the U.S. military responded. In 2015, the U.S. joined Operation Atlantic Resolve, NATO’s largest military exercise in more than 10 years. More than 36,000 troops from 30 nations took part in training exercises and security activities in the Baltic states neighboring Russia as well as Poland, Romania, Bulgaria and Hungary. The operation is ongoing and continues to strengthen America’s relationship with the European allies it has supported for the past 70 years.

Meanwhile, following the terrorist bombing of a Russian Metrojet airliner over Egypt that killed all 224 people on board, Russian president, Vladmir Putin, vowed to punish those responsible after an ISIL affiliate claimed responsibility for the attack.

“We will search for them wherever they may be hiding. We will find them anywhere on the planet and punish them,” he declared, shortly before ordering airstrikes against ISIL targets in Syria in September.

However, upon closer inspection, U.S. officials noted that the Russian airstrikes didn’t appear to be targeting ISIL but rather opposition groups fighting against the Assad government, a long-time Russian ally. Relations between Russia and the U.S. continued to be strained in the following months amid concerns that their jets inadvertently clashed over Syria and after an Amnesty International report claimed that Russian air campaign has killed at least 200 civilians.

Thankfully, in December, the U.S. and Russia finally came to an agreement on a draft of a U.N. Security Council resolution that called for a cease-free and political talks to end the civil war in Syria, a conflict that has caused the death of more than 250,000 people and forced millions to flee their homes. 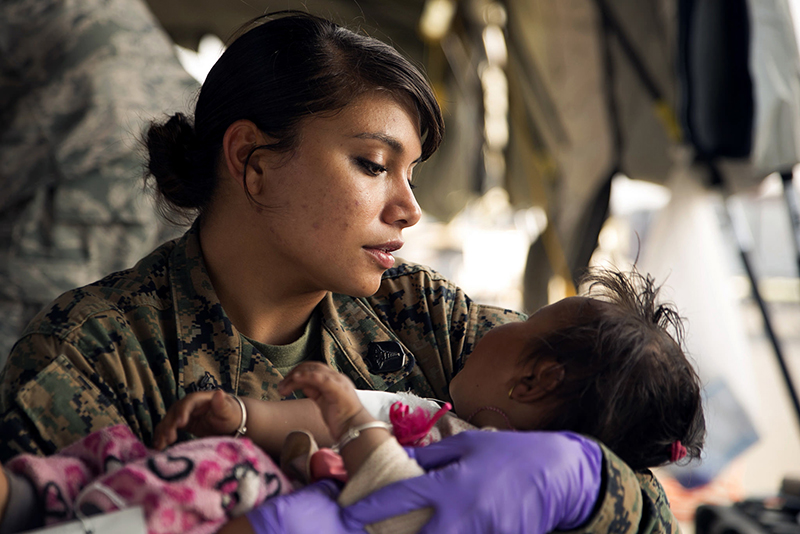 Following the magnitude-7.8 earthquake that devastated the Himalayan country of Nepal in April, the U.S. military jumped into action to deliver lifesaving relief in Operation Sahayogi Haat, or “Helping Hand.” In all, 900 U.S. personnel joined teams from 24 countries to deliver over 120 tons of humanitarian aid to displaced Nepalese citizens and helped transport 553 people during the month following the earthquake. The Defense Department's efforts in Nepal greatly reduced the scale of the humanitarian disaster in remote mountain villages and the capital, Kathmandu.

Unfortunately, during the operation, a Marine Corps UH-1Y Huey helicopter and its crew of six Marines and two Nepalese service members were lost while delivering humanitarian assistance. After a search, the wreckage was discovered in mountainous terrain near the town of Charikot.

Back on home soil, members of the Army National Guard responded to a record-breaking blizzard that buried the Northeast in January, fought wildfires in five western states and responded to historic flooding in South Carolina in October.

All images courtesy of the Department of Defense.