Last Friday, December 1st, Lin and I were lucky enough to attend the Philly POPS annual holiday benefit concert I’ll Be Home for Christmas: A Salute to the Military and First Responders, as guests of HeroVet Chuck Widger and his spouse Barbara. For the fourth year, the 65-piece POPS orchestra kicked off its Christmas concert season by hosting free tickets for 2,000 members of the military, veterans, police and fire departments, and their families. Before the event, Lin and I dined with Philly POPS Board Member Joe Del Raso and CEO Frank Giordano.

Comcast NBC Universal was a leading sponsor of the event. SVP (Military and Veteran Affairs) and Brigadier General (Ret) Carol Eggert warmly welcomed the guests. The concert was presented in partnership with the USO, the City of Philadelphia, the Commonwealth of Pennsylvania, and the Philadelphia Police and Fire Departments. PA Governor Tom Wolf served as Honorary Chair of this event.

The magnificent Kimmel Center was host to the 180-voice Philly Pops Festival Chorus, together with the Philadelphia Boys Choir, and the St. Thomas Gospel Choir. What a show! One of our favorite parts was the opening number, the Star Spangled Banner sung brilliantly by an Army Veteran.  Baritone Justin Hopkins, a former member of the Boys Choir, sang with passion and precision to great applause! We also loved the acts in the lobby before we even entered the show. Santa and Mrs. Claus were there to entertain the children who attended, and we could tell it was a very special moment for many of them to see Santa and listen to carolers singing classic holiday songs. 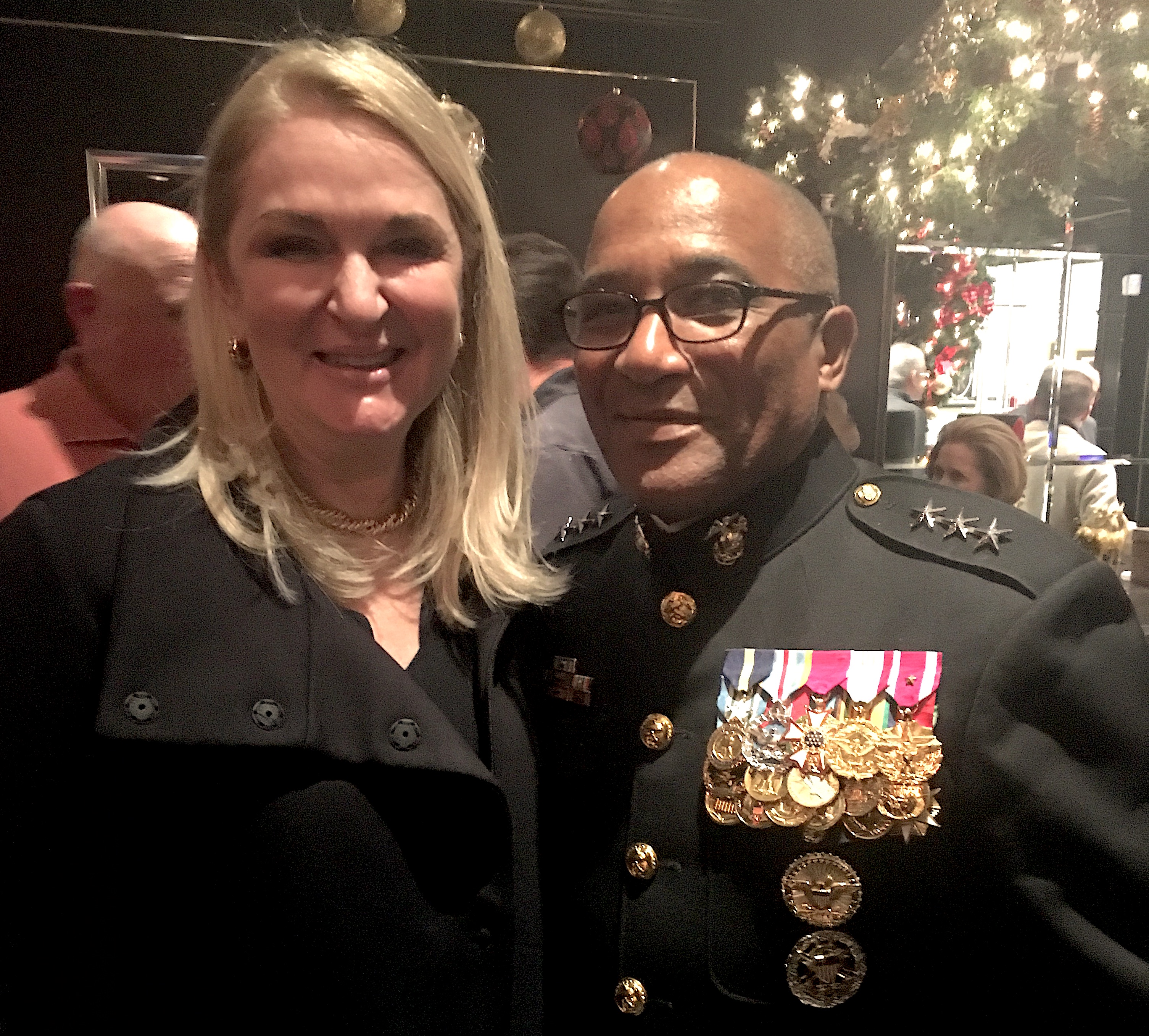 One of the most special moments of the evening for us was when we got the opportunity to meet Lieutenant General (Ret.) Ronald S. Coleman Gen Coleman (pictured above with Lin), who is the second African-American in the Marine Corps to reach the 3-star rank. After a nice chat, he gave Lin his challenge coin to honor her Marine Corps father’s service in the Pacific during WWII.

This is just one of many inspiring encounters we have had with our military leaders at such events. It especially warms our hearts when the children of our military service members get to be the center of attention and enjoy a magical holiday event. We want to thank the Philly POPS for putting on such an amazing show and making this night possible in creating special holiday memories for our deserving military, veterans and first responders and their families.

Veterans Advantage Awards HeroVet: Colin Powell Four-star general Colin Powell, 65th United States Secretary of State and first Black to hold such a high office, died on October 18, 2021 of complications with COVID-19 and his battle with myeloma, cancer of plasma cells. He was 84 years old, and was an inspiration to millions of Americans, civilians, veterans and today’s military.
Discounts & Benefits Scott's View: Veterans Advantage Helps Defend Against High Prices Not a day goes by that we don’t see news headlines talking about soaring prices. You’ve  probably seen it in your food shopping, energy bills, and shopping for everyday items to keep your home stocked. Veterans Advantage is here to help - as we always say, You Protect Our Country. We Protect Your Wallet!
Military & Veterans Life Scott's View: Remembering Army General Ray Odierno I want to take a moment to recognize the passing of General Raymond T. Odierno, a key leader of American forces in Iraq during the height of our country's war there. He died at 67.
Military & Veterans News Scott's View: One month until Veterans Day With the calendar reaching October, that means we are a month away from one of my favorite times of the year. Veterans Day for so many Americans represents a time for remembering, reflecting, and thanking those in service.