This March, Women's History Month, underscores these accomplishments and brings stories of service to life.

Groups such as the VA’s Center for Women’s Veterans, The National Women’s History Project, and the Women in Military Service for America Memorial, celebrate women’s contributions to our democracy and armed forces.

And although women continue to break barriers, they have just begun to influence the combat readiness of our armed forces. In 2015 the U.S. Department of Defense decided that all combat jobs would be open to women, and by 2016 that was formalized when ten women became the first female graduates from the U.S. Army's Infantry Basic Officer Leaders Course at Fort Benning, GA.

Some famous military firsts: In 1918, the Secretary of the Navy allowed women to enlist in the Marine Corps for clerical duties. Opha May Johnson then quickly became the first female Marine. Dr. Mary Walker, the only woman to earn the Medal of Honor, is known for saying “Let the generations know that women in uniform also guaranteed their freedom.”

These days, we recognize women such as Senator Tammy Duckworth, an Iraq War veteran, veteran advocate and former Assistant Secretary of Veterans Affairs. Duckworth was one of the first Army women to fly combat missions during Operation Iraqi Freedom.

In 2004, a rocket-propelled grenade hit Duckworth’s helicopter, and she lost both her legs and partial use of her right arm. She is the first disabled woman elected to serve in the House of Representatives, the first female double amputee in the Senate, and the first Senator to give birth while in office,

Duckworth is also an inductee into the U.S. Army Women’s Foundation Hall of Fame. At the same time, Brigadier General Wilma L. Vaught, USAF (Ret.). Vaught, was also named to the Hall of Fame. Vaught is one of the few female Vietnam War veterans who was not a nurse.

Women also lead as the heart and soul of military families across the United States and around the world. Through the work of Tragedy Assistance Program for Survivors (TAPS) families of the fallen receive the help they need and deserve. The group is run by Bonnie Carroll, an Air Force Veteran.

Other key facts about women and the military:

Other military women recognized by Veterans Advantage, co-founded by a woman, in past years include: 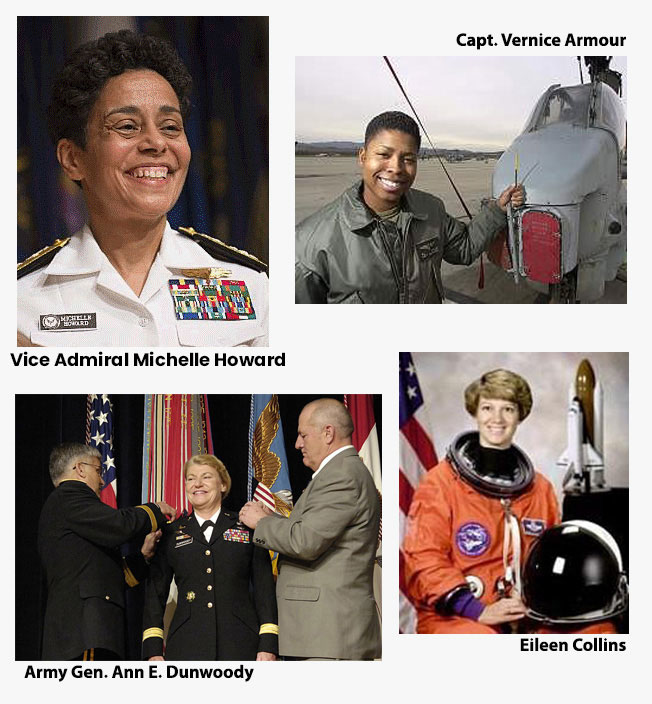 Military & Veterans Life Scott’s View: Armed Forces Day and Military Appreciation Month Tomorrow is Armed Forces Day, a day to honor those serving in all our Military branches; Air Force, Army, Coast Guard, Marines, Navy, Space Force.
Military & Veterans Life Scott’s View: Justin Constantine: A Great Marine and Legacy When I first learned of Justin Constantine's death, I was shocked and saddened. So many of our fallen men and women who served our nation deserve a long and satisfying life that many fellow veterans are fortunate to have today.
Veterans Advantage Awards HeroVet: Justin Constantine Editor’s Note: Marine Lt. Colonel, attorney and Veterans Advantage HeroVet Justine Constantine died on May 6, after a bout with cancer. Justin was severely wounded and narrowly escaped death from a sniper’s bullet to the head in Iraq in 2006. He endured countless surgeries, and with the support of his spouse, Dahlia, recovered and became a nationally recognized author and tireless advocate for Veterans. His HeroVet profile of 2016 is republished below. It is a story of great determination and resilience that serves as inspiration for all of us. He will be greatly missed.
Discounts & Benefits Scott’s View: Military Spouses & Mother’s Day from Veterans Advantage This is a big weekend. First, because today is National Military Spouse Appreciation Day! Longtime fans of Veterans Advantage know that we believe when one serves our nation’s military, the family serves.