American skier Lindsey Vonn dedicated her 2018 Winter Olympic performance to her grandfather, Don Kidlow, who served in the Army and was stationed in South Korea, not far from where Lindsey competed. 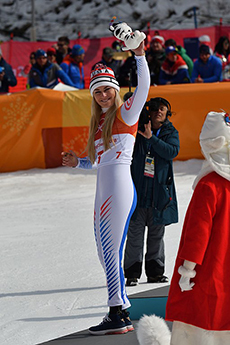 “Knowing that I was trying to win a medal for my grandfather — who died in November and whose ashes I spread in South Korea — was very emotional. This is something that I've been dealing with since he passed away,” she told THINK magazine after the games.

An accomplished three-sport athlete himself, her grandfather died unexpectedly on November 1, 2017. Serving in the U.S. Army Corps of Engineers in Korea, he built roads and military facilities, and sometimes served behind enemy lines. He is survived by his spouse Shirley, four children, and 14 grandchildren, including Vonn.

Vonn attributed her interest in skiing to Kildow, and her success to the military mindset instilled in her by her late grandfather.

"I think I have his work ethic," Vonn tells CNN about the Korean War veteran. "I feel like my adversities are nothing compared to what he went through."

Dramatically, Vonn was able to earn a bronze medal near the end of the Games, capping a comeback from injuries she sustained in the 2014 Olympic Games in Sochi. Vonn now has three Olympic medals, including one gold, and seven World Championship medals. Overall, she has reached the podium in another 135 World Cup races.

Drama was also the theme for the 7 U.S. Olympians who currently serve in our military. Although they did not win a medal, they represented our country and the ongoing tradition posted by the U.S. Army’s World-Class Athlete program. The program’s best-known alumnus was Steve Holcomb, a three-time Olympic medalist, including the gold which he took home in 2010 at the Vancouver Games. Holcomb tragically died last May at the U.S. Olympic Training Center in Lake Placid.

Christopher Fogt, a captain in the U.S. Army, retired from the sport after earning bronze in 2014 with Holcomb in the Sochi Games. Holcomb persuaded both Fogt and Steve Langton from the original bronze-winning team into returning to the sport one more time for another run at Olympic glory. Holcomb’s unexpected passing sent the team on a path to recovery.

“You can’t replace him,” Fogt said, choking back emotion, told Utah’s Deseret News. “Try and do our best to honor his legacy, and I think he would be, well, he’d be proud of what we did. We did not quit.”

Adding to the drama, Fogt’s teammate on the four-man bobsled team, Justin Olsen had an emergency appendectomy just before the start of the games. Olsen was the brakeman of the 2010 Gold Medal-winning four-man team with Holcomb.

Meanwhile, in Women’s Luge, U.S. Army Sergeant Emily Sweeney had a brush with tragedy but prevailed. In 14th place after her third run, Sweeney was near the notorious “curve nine” – already known as the most challenging part of the course, and possibly the world – in the final heat when she bounced and took a breathtaking crash. She was able to walk away from the crash “banged up” and was cleared free from any concussion.

"It's definitely one of the harder curves around the world," Tucker West of the U.S. Men’s Luge team told NBC Olympics.