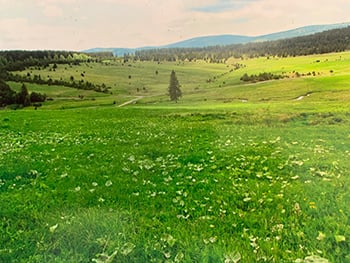 Editor’s Note: In honor of the 75th anniversary of VE Day this month, and to commemorate those who made the ultimate sacrifice on Memorial Day weekend, we want to mark a tragic event surrounding American Soldiers in Czechoslovakia just days before the end of WWII in Europe.

As celebration of the 75th Anniversary of World War II ends in the Czech Republic, people of the town of Hartmanica, close to the Czech-German border in Bavaria pause once again at a simple memorial to nine American soldiers who were killed on 5 May 1945 just before Germany capitulated.  Many years since the end of the war, townspeople have placed garlands of flowers in front of the plaque attached to a large rock to commemorate the needless loss of American soldiers’ lives in the now obliterated hamlet of Zhuri, several kilometers southeast of Hartmanica.  The soldiers’ sacrifices have not been forgotten.

On that day, the squad of Staff Sergeant John W. Garner of Company “I,” 357th Infantry Regiment, 90th Infantry Division, was leading his men over the verdant terrain north of the Czech border towards Zhuri.  Their mission was to assist in clearing a path through hilly forested terrain for the 4th Armored Division to continue Patton’s attack north towards Prague, a mission which was subsequently aborted by Eisenhower.  The regiment’s Third Battalion was given the task of clearing the town and allowing the projected advance to continue. 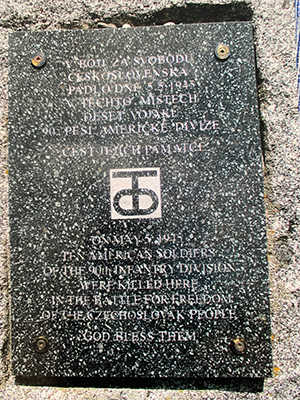 Zhuri was a small town with a German speaking population.  The people lived in a part of the Czech Sudetenland which was occupied by Germany before WWII fighting began in 1939.  Hitler, through agitations led by Karl Henlein, had brought the region under German control in 1938, thereby splitting the region off from the rest of Czechoslovakia.  People of Zhuri retained their ethnic German identity and in 1945 served as a potential hostile obstacle to the American advance.  For that reason, the village became a target which had to be neutralized.

At first glance, it did not seem there was any enemy in the town.  Indeed, as Garner and his men moved forward, it appeared to them that the place had already been captured by Americans.  The U.S. Army 2nd Cavalry Group, a light armored reconnaissance unit, had been operating in the vicinity for several days and had encountered some desperate die-hard German resistance on 4 May.  In the process at least one M-8 armored car and a quarter-ton truck had been lost to the enemy.  Garner and his men observed two such vehicles partially hidden on the outskirts of Zhuri, assumed they were in American hands, and prepared to greet some friendly cavalry troopers.

Unfortunately, when the Americans got closer to the vehicles, they saw too late that a crude identifying German cross had been painted on the front of the armored car. Suddenly it moved out of its position and advanced on Garner’s squad down the main road out of the town.  When the Germans opened fire, Garner and his men frantically sought cover by jumping into a shallow ditch on the side of the road.  There was to be no respite for the squad as the enemy gunned down the soldiers, firing on them until all were killed. 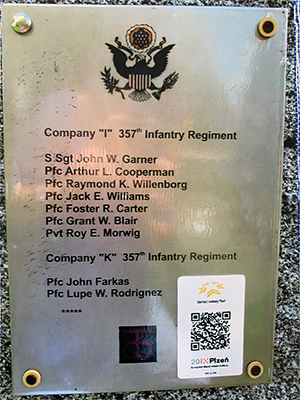 Thus began the fateful and fierce battle for Zhuri.  The rest of the Third Battalion attacked the town after artillery and mortars brought destruction down upon the heads of the German defenders.  No quarter was given as Companies “I” and “K” made quick work of the resistance with Company “K” losing two soldiers in addition to Company “I”s Garner and his men.

Today, all that remains of Zhuri is the memorial to the killed American soldiers and a wooden pillar with a photo of the former town’s church and an explanation of the town’s pre-World II existence affixed to it. The area was used by the Czech Army as a training ground after the war and the region is now part of a national park.  The peaceful landscape betrays the grim fighting that took place there some 75 years ago and although what was considered German treachery is now lost to history, the local Czech people have not forgotten the American sacrifice as evidenced by yearly placing of floral arrangements around the memorial to Staff Sergeant Garner and his men.

Military & Veterans News Scott's View: Operation Desert Storm: 30 Years Later This month marks the 30th anniversary of Operation Desert Storm, what most Americans remember as “Gulf War I.” As efforts for peace and troop drawdowns in the region remain a priority, we want to recognize the service and sacrifices of our veterans of that war. You are not forgotten. Thank you!
Military & Veterans News Looking Forward to a Better 2021 Like most of you, I was horrified by the events in the U.S. Capitol last week. There is no excuse for the violence of last week in Washington, and we mourn the senseless deaths of those caught in the crossfire. No doubt you feel that the intensity of anger and hostility in our nation has reached historic highs, and the adage “we’re all in this together” needs a renewed focus.
Veterans Advantage Awards HeroVet: House of Representatives Chaplain Margaret Kibben In a week that was tumultuous in Washington D.C., one piece of news is good: the first female Chaplain to serve the U.S. House of Representatives was appointed - and she’s a Navy veteran with over 30 years of military experience. Retired Navy Rear Admiral Margaret Grun Kibben replaced retiring Rev. Pat Conroy last week.
Military & Veterans News Scott's View: New Year’s 2021 Resolutions and More Savings to Come! Happy New Year! Here’s hoping the year 2021 is a much better one than the last.