In a local ceremony in North Carolina recently, several of the military’s first Black Marines were posthumously awarded the Congressional Gold Medal for their service with the legendary Montford Point Marines. Their experiences tell a bigger story for the Marine Corps and our nation.

The Montford Point Marines were the first Blacks to enlist in the U.S. Marine Corps after President Franklin Roosevelt issued an Executive Order to establish the Fair Employment Practices Commission in June 1941.

Seventy years later, on Nov. 23, 2011, President Barack Obama signed legislation to award the Congressional Gold Medal to the Montford Point Marines. But only about 400 are still with us, and this latest medal ceremony recognized the families of five who have since died – Cpl. James Elijah, Cpl. Robert Givens; Cpl. Raymond Smith, Pfc. Raymond Davis and Cpl. Darling Quashie.

Their service dates back to when the country was rife with racism, segregation, and war, more than 20,000 of these men chose to serve their country regardless of the challenges they faced due to their race.

“The Marine Corps in the early days were looking for the best Black men they could find,” said Sgt. Gene Doughty in an interview on the U.S. Marines website. Though many recruits expected a traditional Marine boot camp experience, the military was still segregated at that time. They had an eye-opening experience.

“They never told us that we’re going to a separate boot camp. Never mentioned anything about it until we got there to Montford Point Camp. That’s when we found out that we weren’t going to San Diego. We were not going to Paris Island,” said retired MGSGt. Robert Reid.

Instead, they were sent to Camp Montford Point in Jacksonville, NC, which opened on August 26, 1942. 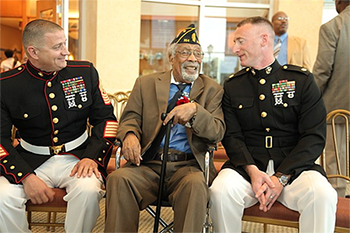 Cpl. (ret) Deloyce McMurray, seated center, speaks with Maj Gregory P. Gordon and SgtMaj Christopher G. Combs during a Montford Point Marine ceremony in which he was presented the Congressional Gold Medal in 2013 at the Abraham Lincoln Presidential Library.

“It was all set up as an experiment meant to fail,” Reginald Moore, the grandson of a Montford Point Marine, told the Chronicle-Tribune. “They were not expected to do well in the boot camp, let alone become Marines. Given the environment they were set up in, it wasn’t hard to believe that they would fail. The caveat is that they didn’t fail. They succeeded. They prospered. They showed up and did everything expected of them. Despite the harsh treatment and training, they became Marines.”

“My drill instructor was the one that told us that if you’re going to be a Black Marine, you’re going to have to be better than everybody else,” said Robert Reid on the Marines website.

These Marines were not permitted in combat until 1949, when the Marines were desegregated and Camp Montford Point was decommissioned. The base was renamed Camp Johnson after the original Montford Point Marine Drill Sergeant Sgt. Maj. Gilbert Hashmark Johnson. It is the only U.S. Marine base named for a Black man.

About 400 of the original Montford Point Marines are known to still be alive today.