Last night, 50 women competed for the 100th Miss America title, and four of them are currently serving in the U.S. military. Amongst the pageant participants were an active-duty soldier, an Army reservist, and two Navy ensigns in the Reserve who fought for the crown.

And although neither of the four won the crown, the U.S. military’s representation in last night's pageant was greater than any single year, and is helping bring awareness to the unique characteristics of what it takes to serve in the U.S. military.

For a century, the Miss America Organization has worked to “prepare great women for the world and prepare the world for great women” through service and scholarship. While passionate about pursuing the prestigious title saluting beauty, talent, and activism, all of the women agreed that their military duties take priority.

“My responsibility as a soldier comes first,” said Maura Spence-Carroll, the active duty Army specialist who competed as Miss Colorado (pictured above). In an interview with Stars and Stripes, Spence-Carroll’s study of the history of the military and Miss America goes back to 1992 when Army officer Leah Hulan competed as Miss Tennessee. The pageant, meanwhile, says it does not track military service of its participants.

Carroll’s grandfather was an intelligence analyst in the U.S. Air Force, and she works in the same capacity at Fort Carson. She aims her activism toward mental health and veterans. “Being in an infantry unit, which is such a male-dominated experience and so different from civilian life, I realized that there is still a stigma that exists around receiving mental health care.” 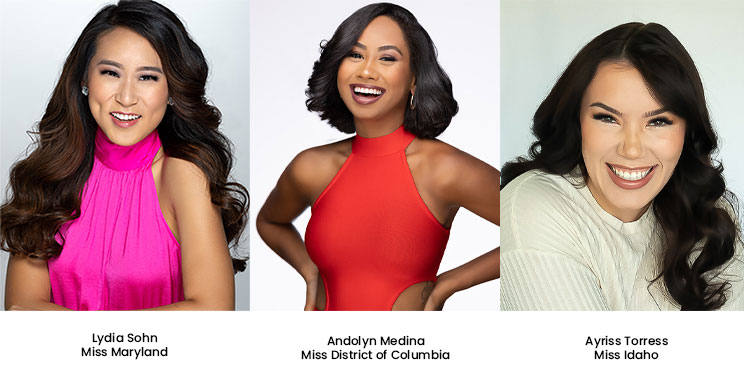 Miss Maryland, Lydia Sohn, is an ensign in the Navy and plans to become a Navy Doctor. “I am eager to serve the individuals who sacrifice daily to serve our nation. I also aim to join the Navy’s Humanitarian Missions to aid our world’s most vulnerable populations,” she said.

The other ensign in the Navy is Miss DC, Andolyn Medina. She is the daughter of two Naval officers and works as a licensed therapist in DC and Virginia. During her interview for the Miss DC title, Medina wore her uniform. “In that interview, I wanted to go in representing something that is my best self, that makes me feel the most powerful, the most confident version of me. When I thought about that, I thought that there is nothing that made me feel more confident than my Navy uniform,” she told The Enquirer-Gazette.

Ayriss Torres, who currently serves as a civil affairs specialist with the U.S. Army Reserve, competed as Miss Idaho. She enlisted in the Army at age 19 and completed Special Operations Training at the JFK Special Warfare Center & School on the Commandant’s List, becoming a 38B Civil Affairs Specialist. She currently serves with the 405th CA Battalion in Salt Lake City, UT as a government liaison between the US and Asia Pacific Region, coordinating humanitarian relief to foreign nations after war and natural disaster.

"The value of service and the value of giving my life for someone, that is completely what my motto is from here on out," she told her local television station. Within the Miss America competition, she said, “I think it's the year of the military woman. We are going to do amazing things and show how much we love and care for our country."