Perfectly aligned white marble tombstones dot green hills like pearls, strung together by memories of fallen military members. That’s the sight at Arlington National Cemetery near Washington, DC, which is the resting place for more than 400,000 veterans and their dependents over approximately 640 acres on the Potomac River. This Memorial Day we remember the fallen soldiers buried at Arlington and across the nation. And this Saturday Arlington hosts the inaugural Flowers of Remembrance Day, where the public can bring flowers to the Tomb of the Unknown Soldier to pay tribute to the sacrifice of so many veterans.

Flowers of Remembrance Day is a nod to the roots of Memorial Day. “Decoration Day,” as the holiday was first known, was first celebrated in 1868 at Arlington National Cemetery. General John A. Logan, commander-in-chief of the Grand Army of the Republic, officially proclaimed May 30 as Decoration Day “for the purpose of strewing with flowers or otherwise decorating the graves of comrades who died in defense of their country during the late rebellion.” At that first commemoration, General James Garfield gave a speech and 5,000 participants decorated the graves of the 20,000 Civil War soldiers buried there. The current tradition of soldiers of the 3rd U.S. Infantry Regiment placing flags centered a foot in front of each tombstone at Arlington began in 1948. Memorial Day became an official federal holiday in 1971. 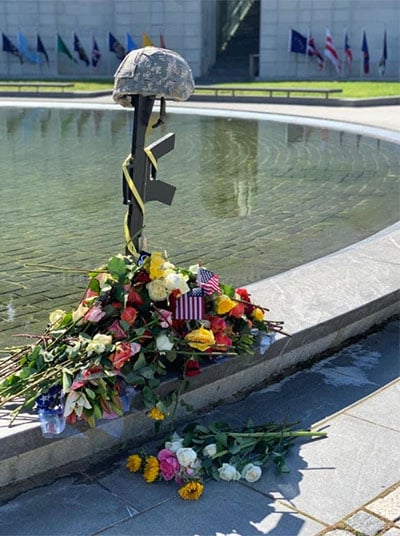 The U.S. Army seized Arlington Estate from the Curtis-Lee family on May 24, 1861 to defend Washington, D.C and three years later, Arlington officially became one of about 74 national cemeteries at the time. That was on June 15, 1864, by order of Secretary of War Edwin Stanton. It initially spanned only 200 acres. The Army continues to control the cemetery to this day and it is now one of 155 national cemeteries in 42 states and Puerto Rico. However, Arlington is the only national cemetery to hold servicemembers from every war in U.S. history.

With the recognition of Decoration Day growing nationally after the Civil War, the demand for burial space led to the creation of several additional burial sections. Arlington became known as “the nation’s premiere military cemetery.” There can be up to 30 funerals per day and the cemetery conducts approximately 6,900 burials each year. The cemetery is divided into 70 sections, with particular areas designated for nurses, military chaplains, and those killed in the War on Terror since 2001. Section 27 was arranged for formerly enslaved people. Notable graves include former Presidents William Howard Taft and John F. Kennedy, the first African American Supreme Court justice Thurgood Marshall, former Secretary of State General Colin Powell, the second female Supreme Court  justice Ruth Bader Ginsburg, and more than 400 Medal of Honor recipients.

Nearly four million people visit Arlington National Cemetery annually. One of the most visited sections of the cemetery is The Tomb of the Unknowns, a memorial dedicated to deceased U.S. service members whose remains have not been identified. It is part of the  Arlington Memorial Amphitheater where Memorial Day events take place. The Tomb of the Unknown Soldier has been perpetually guarded since July 2, 1937, by the U.S. Army. The Tomb Guard marches exactly 21 steps down the black mat behind the Tomb, turns, faces east for 21 seconds, turns and faces north for 21 seconds, then takes 21 steps down the mat and repeats the process.  The number 21 symbolizes the highest military honor that can be bestowed, the 21-gun salute.

The first Flowers of Remembrance Day at the Tomb of the Unknown Soldier is Saturday, May 28 from 9am-4pm. The 2022 Memorial Day observance will be held Monday, May 30 at 12pm.

Discounts & Benefits Scott's View: Independence Day Savings & Reflections Summer began this past week, and next week is Independence Day weekend, aka the Fourth of July. There will be celebrations across the country, and at military and government installations around the globe, to celebrate our nation’s 246th birthday.
Veterans Advantage Awards VetFamily: Jessica Alba Actress Jessica Alba hails from a military family - both her father and grandfather served our country. Among her other accomplishments on and off the screen, the movie star, philanthropist, and entrepreneur became one of six newly announced members of the board of directors at Yahoo this month.
Discounts & Benefits Scott's View: Book An Exclusive Vacation Package This Summer with Veterans Advantage This week, we’re focusing on recognizing dad for Father’s Day with special gifts, as well as other exclusive summer savings with VetRewards. First and foremost, enjoy the day with dad!
Military & Veterans Life Scott’s View: Remember the U.S. Army Birthday Next Week We hope you enjoy today’s cover story on the history of Flag Day, which is next Tuesday, June 14. Similar to other nations that designate a day to celebrate their flag, ours in the United States reflects our unique history. And it’s an exciting one!